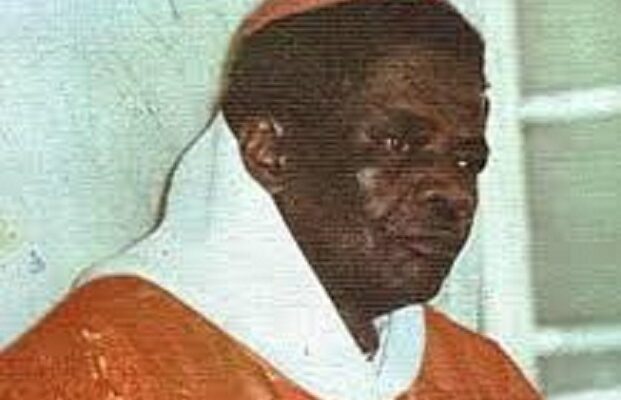 The late Rt. Rev’d Herbert Haruna was the pioneer Anglican Bishop of the Kwara Diocese from 1974 when the Diocese was established until his demise on 1st November, 2008. He died the ripe age of 84 years. Bishop Haruna was one of those honoured with an Award, though posthumously, at the 40th Anniversary and awards and presentation of history book of Mount Olives Anglican Church, Ilorin, the Kwara state capital. Ms Ann Ebun Haruna, the last child of the deceased, in this interview with Stephen Olufemi Oni spoke on sundry issues, including the lifetime of their patriarch, the award and  the Mount Olives Anglican Church, among others. Excepts:

Can we know you?

My name is Ann Ebun Haruna. I am the last child of our deceased patriarch. I came down to collect the prestigious Award on behalf of our family.

What was the reaction and feeling of family members when you heard about Papa’s demise?

We accepted with submission and later we got used to the void. However, it was hard on mama. Eventually, we had to gather our acts together knowing that Papa had to go and rest after 52 years of hard labour in the Lord’s vineyard. To God be the glory that Papa died at a ripe age of 84 years in 2008 and for his exemplary life. Papa retired in December 1994 at the statutory age of 70 years. He was the Anglican Bishop of Kwara Diocese for 20 years. So we thank God for his fulfilled life.

What’s your take on this award given to your late father by the Mount Olives Anglican Church?

Papa was not somebody who just established it. He was the first Anglican Bishop of the Kwara Diocese when it was inaugurated in 1974 and, expectedly, he had so many challenges some of which you might have heard. For instance, the two standing Anglican Churches in Ilorin then were Yoruba speaking, one at the Muritala Mohammed Way, now a Cathedral, and the other one at Baboko. And so he thought that his Chapel, a private Chapel to the Bishop which was at the Bishop’s Court, was something he could use to start up the English section of the Church. This he did and he threw it open to the public. It was named Mount Olives Anglican Chapel and it grew and grew and grew until the time he retired in December 1994 and it is still growing and today here we are to the glory of Almighty God. So, he is being awarded for his vision as the founding father. And not only for his vision but also for ensuring he put things in place for the Church to grow even beyond what we even dreamt or thought.

What was the feeling of the family about the recognition and award given to your late patriarch?

Naturally, we feel elated and that’s the reason one of us is here in person to receive the Award. We feel elated that our father has been honoured, we feel he’s being appreciated, we feel that all his work is not in vain. We also feel that the Bible itself is being fulfilled in our time that we will be tested by our works and what we will be remembered for when we die. That is what we see and we feel elated and humbled by the fact that we have this kind of person in our lives. Interestingly, in all his life we were with him we probably did not see the giant that they are seeing in him. We saw him, we saw different parts of him and I think because of the familiarity we could not see this kind of vision until now as adults we begin to appreciate what he had been to us. He’s an icon, he’s something that we also feel challenged, what will be said about us as a family, as individuals, as his children 40 years after we leave a place.

Mount Olives, I was part of it from foundation, I was also in choir, I also handled the children choir too while I was still there. It was a family church, it was an elitist kind of thing and there was a lot of cordiality amongst the priests and the Laity, the children of the priests, the children of the Laity were one, we had the children’s choir singing alongside the adults, so it was a family kind of thing, very closely knit and most of the parishioners were from the University of Ilorin and we also had civil servants, core civil servants and we also had some of the profiles like Professor Fakeye, the then Chief Medical Director of the University of Ilorin Teaching Hospital who was an usher. Those were the caliber of people who were in the church service, and so we didn’t just have any kind of rowdy setting, we had order, we had respect, we had courtesy and everything you expect to find in the household of God was there intact, I don’t recall any kind of rancour of a magnitude in this kind of setting, so that’s what I remember about this church.

What is your admonition to the Church?

Well, I don’t know now because I have been off since 1995, but from what I see now, they have maintained that culture of the past for which the church is known and reputed and I just want to pray that God who saw them through 42 years will see them beyond. But I also have to charge them  not to forget the good foundation laid by the founding fathers as well as those of the founding laity. May we still have among this new generation professors who will be prepared to carry brooms like Mama Elukpo and lots of other people who would come with brooms to sweep the Church. Then we had mothers who were not afraid to correct the young girls for their shabby dressing. This is the charge I want to put before them; it’s a big job for them to do to maintain what they have to do and the sanctity of the church.

What’s your charge to the youths?

Hmmmmm, the youths? I will just admonish them to accept Christ, know Christ. It is not about the amount of education or certificate you acquire, if you don’t have Christ as your foundation you are missing it. It is not just having Christ but doing the will of Christ. As your founding fathers have done, do so, then you too will be sung as heroes.