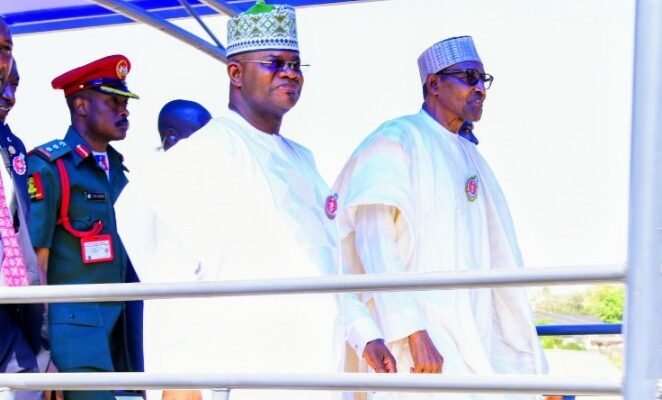 Buhari made this known during his official visit to the state to commission Bello’s legacy projects in Okene, Lokoja and other parts of Kogi.

He stated that his administration is working to reposition Kogi state as an investment hub through the activation of solid minerals in the state.

“I am impressed by the performance of Governor Yahaya Bello. He has done very well in the area of security and projects execution in Kogi state.

“The commissioning of the projects is in realization of our campaign promises to the people of Kogi state. I have been briefed by Governor Yahaya Bello for the numerous projects he has executed for the people which include Confluence University of Science and Technology at Osara, Rice mill in Ejiba, hospitals in Idah, Kabba and Okene, construction of roads in the three senatorial districts, GYB model secondary schools among others.

“In Lokoja there is a flyover project the first of it kind in Kogi state.

“We are proud of him and we urge him to do more for the people, and I am appealing to the people of Kogi state to support him so that he can achieve and deliver more dividends of democracy and achieve peace and development of the state,” he said.

President Buhari noted that Kogi state play host to AKK gas pipeline projects that will be completed next year, assuring that the project will boost the economic activities of the country with a multiplying effect on the people of the state.

“No project that is dear in our heart like the Ajaokuta steel company located in Kogi state which we inherited in moribund condition from previous administrations.

“The steel company has dispute both locally and internationally, I am glad to say that through our concerted effort we are able to settle the dispute by paying some money and the company is now ready for concessioning to competent private investors that will operationalize it for the people of Kogi state and Nigerians at large.

“We are in talk with a reputable company in United State and by God’s grace Ajaokuta very soon will come back to serve the people of Nigeria.

“The significant of making Ajaokuta steel working again is enormous as it will generate over 500, 000 jobs for Nigerian youth and also generate high revenue for the state and the country in the tune of over 1.6 billion dollar annually.

“Nigerians should be rest assured that my administration will pursue the issue of Ajaokuta steel company to logical conclusion before I leave office as president of Nigeria,” he assured.

Governor Yahaya Bello, while delivering his speech, thanked the President for granting the request to visit the state to commission some of the numerous legacy projects of his administration.

He noted that Buhari’s visit was historic.

Bello recalled that when he was sworn in on 27th January 2016, his government was determined to serve the people hence the commissioning of a competent and professional diverse team who produced the New Direction Blueprint which has remained his administration’s guide in delivering good dividends and accelerated development to the people and in the state.

The document which according to the governor was a vox populi of the summation of the needs of the citizenry have yearly been zeroed down to the state’s budgetary allocation which his administration have ensured the fulfillment of every promise made to the electorate during every campaign.

“We have also ensured that the entirety of the people of Kogi state have benefitted from their financial, natural and every other resources,” he said.

Earlier, the Ohinoyi of Ebiraland, Alhaji Ado Ibrahim commended President Buhari for the enormous support he gave to Governor Yahaya Bello which has translated into the developmental projects he has executed for the state.

Ohinoyi, who was represented by the Ohi of Okenwe, Alhaji Mohammed Anaje, noted that the President’s visit for the commissioning was highly historic as it had been a long time dream that Kogi state would be projected to the world.

“We the traditional rulers in Kogi state highly appreciate all the support you gave to Kogi state and the dividend of democracy that we are enjoying in the state.

“We are glad because this is the first time a seating president come to Kogi central senatorial district to commission projects executed by the state government aimed at improving the living standard of the people.

“Governor Yahaya Bello’s administration is indeed a new direction agenda as it has surpasses the previous administrations in terms of achievements and performance in all sectors,” the monarch said.