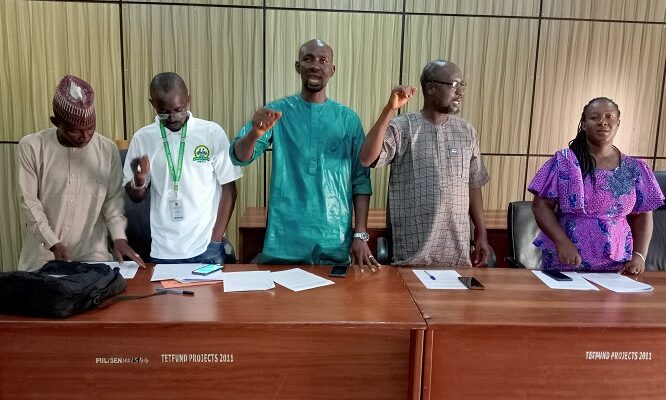 The Senior Staff Association of Nigerian Universities (SSANU), Federal University Lokoja chapter, has called on Federal government to pay promotion arrears of university staff for 2019, 2022 and 2022,

Addressing a press conference in Lokoja on Thursday, Chairman of Federal University Lokoja branch of SSANU, Comrade Adedeji Kazeem Suarau added that the balance of 2018 promotion arrears is being owed university workers.

Adedeji called for the implementation of 2021 promotion as well.

SSANU also appealed to federal government to pay backlogs of their salaries on “compassionate ground”.

Lamenting the working condition of university staff, the SSANU chairman said members are bleeding in silence.

“The promotion arrears of our members in Federal University Lokoja has not been paid from 2019 to 2021 and there are so many irregularities in the payment of 2018 promotion arrears. The promotion of 2021 is yet to be implemented due to salary shortfall and obnoxious personnel budget given to the university.

“It is worthy of note that the third party payments like cooperative deductions have not been paid for October and November 2022 despite the fact we have received salaries for the period,” he said.

SSANU called on National Universities Commission (NUC) to issue directive to stop usurpation of headship positions of the non-teaching by their teaching counterparts.

Comrade Adedeji wondered why teaching staff preferred to be called director, a nomenclature of non-teaching staff, rather than being called a professor.

“At the expiration of two months given to the Federal government of Nigeria on October to implement the August 2022 agreements, the FGN has done nothing on the MoU.

“The 2009 renegotiation committee has not called the Unions to any meeting.

“The National Universities Commission (NUC) has not written any letter to universities to address the issue of usurpation of non-teaching jobs by the teaching counterparts.

“International standard requires a teaching staff to face their teaching, research and community development rather than facing administrative jobs which are not their business.”