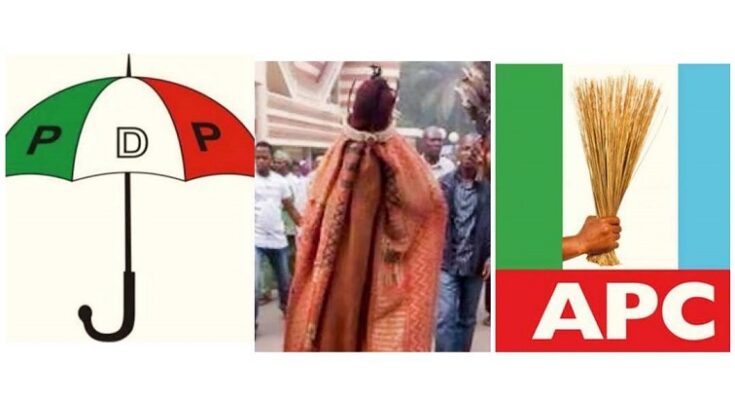 As the 2023 senatorial election in Kogi Central approaches, the All Progressives Congress (APC) in Kogi state has devised dubious means including diabolical practices to usurp the will of the people.

Having seen its impending defeat in the forthcoming senatorial election, undemocratic practices have been introduced by APC and its agents in Kogi central to stop the rising popularity and acceptance of the PDP senatorial candidate, Barr. Natasha Akpoti-Uduaghan.

The latest of such desperate moves is the unusual outing of Eku’oba (an ancient mystical masquerade in Ebirland) in Ihima to carry out sacrifices by the APC.

The masquerade suddenly appeared on Tuesday morning when the Commissioner for Local Government and Chieftaincy Affairs, Momoh Ozigi Deedat paid a courtesy visit to Obobanyi of Ihima in his palace, in Obeiba.

While the unusual event was going on in the palace, the Eku’Oba was directed by the APC agents to religiously circumambulate the family house of the PDP senatorial candidate in the area, the masquerade eventually entered the house from the back door but God disgraced them when the masquerade fell disgracefully in front of the house.

The APC agents who sponsored this show of shame and the custodian of our culture in the land must be questioned to provide an answer to this ugly event.

They must come out to explain what is the reason for bringing out the ancient masquerade at the odd hour and what the family house of Barr Natasha Akpoti got to do with the masquerade that it had to religiously circumambulate the house and entered it.

In Ebira tradition, the ancient masquerade comes out to announce the date of Ekuechi festival, telling the whole land when the Ekuechi Festival is to commence, but the APC has chosen to desecrate the age-long tradition out of desperation.

It should also be noted that this is the second time the APC agents have been disgraced and humiliated with their evil plans.

First, it was bees that chased and stung them in the same place during their rally a few weeks ago, they have been disgraced again and their evil plans trashed in front of the people who were shocked when they chose to use Eku’oba to perform sacrifice at the family house of Chief Natasha Akpoti-Uduaghan.

They will continue to be disgraced and eventually receive a crushing blow at the February 25, 2023, National Assembly election.

Views expressed by contributors are strictly personal and not of Kogi Reports.