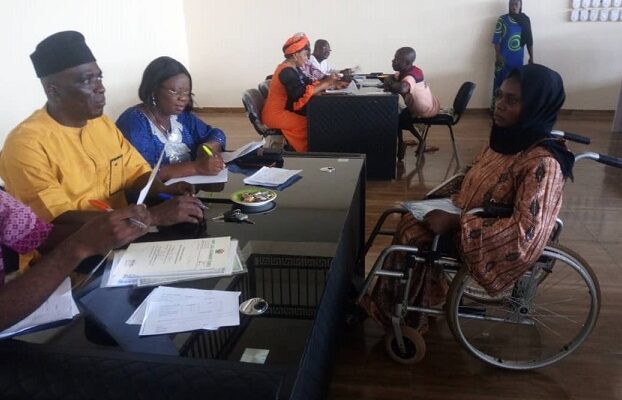 The persons with disabilities (PWDs) who are applicants in the ongoing secondary school teachers recruitment in Kogi, have commended the State Government for a giving them a preferential treatment.

They gave the commendation in their separate interviews with our correspondent on Monday, at the venue of the ongoing Oral interviews for shortlisted candidates at GYB Model Science Secondary School, Lokoja,

They expressed their gratitude to Governor Yahaya Bello for always considering the plight of persons with disabilities and giving them priority in the state.

Miss Ramat Yunusa from Ankpa, who came on a wheelchair, expressed her gratitude to the Governor and Commissioner for Education for giving the PWDs equal opportunity in the teachers’ recruitment.

Yunusa, who applied as Computer Science teacher, also thanked the panelists for giving her special consideration and preferential treatment during the oral interview.

”I am very happy for the preferential treatment given to me during the oral interview. I thank the commissioner and Governor Yahaya Bello,” she said.

Another PWD, Adam Celestine, who applied for English Language, commended the state government for giving people with disabilities equal opportunity without discrimination.

Celestine, who studied English Political Science, said the gesture would go a long way in reducing stigmatization against people with disabilities in the state.

”I promise to contribute my own quota to improve educational value in Kogi State, if employed as teacher,” Celestine said

Also, Mr Lawal Bello from Ajaokuta, said the people with disabilities are always proud of the governor because he had given them voices in the state.

”I am a teacher in private school, but I am grateful to Kogi Government for giving me the opportunity to apply as an English teacher in government secondary school in the state.

”As PWDs, we don’t use to have this kind of opportunity in the previous administrations. So, we thank the governor and the commissioner for this special consideration,” he said

Earlier, the Commissioner for Education Science and Technology, Hon. Wemi Jones, charged the interviewers to continue to maintain the highest level of credibility and transparency in the discharge of there assignment.