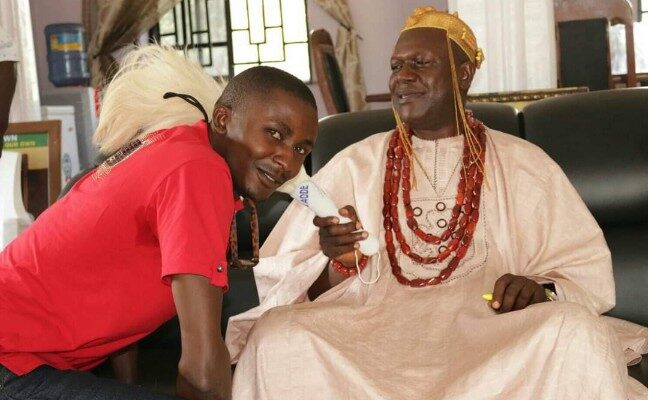 According to John Milton, “He who reigns within himself and rules with passions, desires and fears is more than a King.”

These including the sterling qualities of humility and love are what defines the personality of His Majesty, Oba Anthony Bamigbaiye Idowu, the Olu Adde of Ekinrin Adde in Ijumu Local Government Area. Kogi State.

The young and resourceful Oba Anthony Bamigbaiye Idowu was born on the 23rd of November 1962 to the family of Late Chief Alaa Emmanuel Olajubu Idowu of Okedagba, Ohi-Adde clan of Ekinrin-Adde.

Due to his passion for education, His Royal Majesty Oba Anthony Bamigbaiye Idowu proceeded to the Baptist LSB School, Ekinrin-Adde for his first school leaving certificate in 1975.

He attended the popular Abdul Aziz Atta Memorial College, Okene in 1980 for his Senior Secondary Certificate of Education where he came out with flying colours.

The traditional ruler went to University of Maiduguri, Borno state where he obtained his first degree in Accountancy.

His love for the Accounting Profession propelled Oba Anthony Bamigbaye Idowu to write The Institute of Chartered Accountants of Nigeria and qualified as a chartered accountant in November 2000.

He has also worked in different establishments across the country. For instance, as Administrative Clerk, National Commission for Museums and Monuments, Ibadan Oyo State 1981 – 1983 and JAFCO Industries Limited Kudenda Industrial Estate, Kaduna as Assistant Accountant between 1988 – 1990.

He also worked with Sara Foods Limited, Kirikiri Industrial Estate, Apapa, Lagos as the Chief Accountant in January 2001 and in August 2006 he joined Caverton Helicopters Limited, Nigerian Air Force Base, Port Harcourt as Finance Manager from two thousand and six until he resigned his  appointment to ascend the throne of Olu Adde of Ekinrin Adde.

In December 2017, the good people of Ekinrin Adde were joyful when Oba Anthony Bamigbaiye Idowu was presented with his appointment letter as the new Olu Adde of Ekinrin Adde after fulfilling the installation rites.

The emergence of the His Royal Majesty no doubt is a blessing to all sons and daughters of Ekinrin Adde as Oba Anthony Bamigbaiye Idowu could simply be described as a man that the crown fits.

As a Monarch that carries the oil of favour, the State Governor Alhaji Yahaya Bello in 2018 upgraded the stool of the Olu Adde from 3rd class status to 2nd Class in the Kogi State Traditional Council of Chiefs.

As if that was not enough, in October 2021, HRM Oba Anthony Bamigbaiye Idowu was elevated to a 1st Class Chief in Kogi State, making him the first Traditional ruler in Ekinrin Adde to attain such height

On March 5th 2022, Ekinrin Adde sons and daughters as well as well wishers from all walks of life joined other Kogites at the President Muhammadu Buhari Civic Centre where the Governor presented Oba Anthony Bamigbaiye with his First Class Staff of Office.

Consequently, one unique thing achievement of the Olu Adde is his capacity and unrelenting ability to unite the people of the community on the path of self development.

You will not be making mistake if you call HRM Oba Anthony Bamigbaiye a lucky man. This is because for the first time in the history of Ekinrin Adde, Prof. Olayemi Akinwumi, Vice Chancellor, Federal University Lokoja became the first Vice Chancellor of the Institution from Kogi West and Kogi State in general.

This is apart from Prof. Shola Omotola who was appointed Deputy Vice Chancellor Administration, Federal University Oye-Ekiti and others who got elevated in Military and Para Military Outfits in Nigeria.

All these as well as infrastructural development like construction of Ekinrin Adde Township road, Niger River Basin Water project, a private Polytechnic (FLAGSHIP POLYTECHNIC), Akogba FM Radio among others are proofs that God is with HRM Oba Anthony Bamigbaiye Idowu.

It is on this note that all and sundry must support the workaholic, pragmatic and vibrant HRM Oba Anthony Bamgbaiye Idowu in his quest to maintain peace and attract development to the community. By so doing, the ancestors and founding fathers of Ekinrin Adde will be proud that their effort to build a united, peaceful and prosperous community was not in vain.