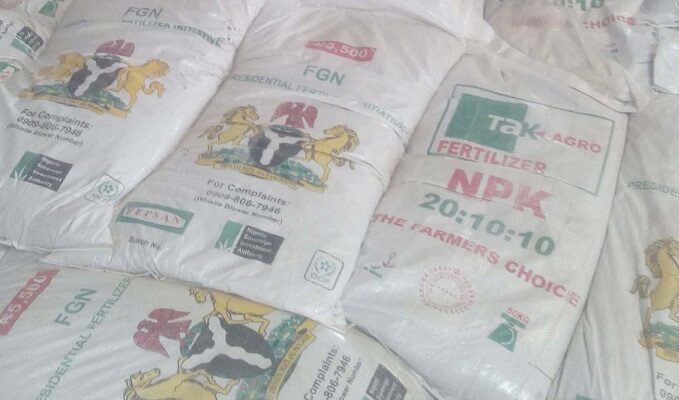 Mr Edibo Friday is a father of one and a crop farmer with more than a decade of experience in Kogi state, North central Nigeria. Friday farms cassava, maize and cashew. He also farms soybeans and is a member of the Green Ally Farmers Cooperative in the Dekina Local Government of Kogi State.

He told this reporter that he and his team desired the use of fertilizers to improve and ensure more yields on their farms but are unable to access the important farm input in the desired quantity.  This, he claimed, is a result of the high cost of purchasing fertilizer.

When asked whether he was aware of the government fertilizer subsidy, he said “ Although we are aware of fertilizer subsidy, it only ends at hearing about the programme, but we never benefited from it. I was asked to pay to open an account for fertilizer distribution, but the fertilizer never came and the money was never refunded. This is the same situation with other farmers around here.”

The pattern of total fertilizer consumption in Nigeria has mirrored the ebb and flow of federal and state government subsidies and the almost annual changes in procurement and distribution rules.

Mr Nanono said, “Preparatory to the provision of the subsidy support, I wish to inform you that the Federal Ministry of Agriculture and Rural Development has registered and developed the database of the smallholder farmers for easy targeting with the fertilizer subsidy support. So far about five million farmers and their farms have been registered with biometrics including farm GIS coordinates. The government has put in place several intervention programmes geared towards supporting the smallholder farmers most especially those affected by the Covid-19 pandemic, flood, #EndSARS and the earlier cessation of rainfall.”

Mr Edibo’s lamentation describes how the policy is yet to impact farmers in some parts of Nigeria, as Edible claimed that even when subsidized fertilizers were made available, they do not reach farmers, as they are hijacked by ‘big men at the top,’ a term he used to refer to officials of government agencies or politicians involved in the distribution of fertilizer to the farmers at a subsidized rate. As a result, Mr Ediobo claimed he had to contend with poor yields from his farm.

Fertilizer is an important agricultural input as it helps maximize crop yield. Significantly, fertilizers help the soil to increase its fertility. By implication, it promotes better growth. It is for this reason that manures had been used as compost over the years since agriculture began. However, with the help of fertilizers, plants become resilient against harmful plant pathogens, pests, and weeds. It provides nutrients that are not available in the soil; replaces nutrients removed at [previous] harvest; and balances nutrients for better product quality and high yield. To achieve food security in Nigeria and even worldwide, fertilizer has become very pertinent. In recognition of this fact, this agricultural input was introduced in the 1970s, especially with the proliferation of Agricultural Development Projects (ADPs).

According to the International Food Policy Research Institute report 2008, “The Federal Government of Nigeria (FGN) recognizes that the nation’s food security can be improved mainly through increasing agricultural productivity, and has instituted various interventions aimed at precipitating widespread adaptation of intensive farming technologies. By scope and financial commitment, the most important intervention is the subsidization of inorganic fertilizer”

The document said that since the late 1970s, fertilizer had been heavily subsidized, “with rates that have been as high as 95 percent. The pattern of total fertilizer consumption in Nigeria has mirrored the ebb and flow of federal and state government subsidies and the almost annual changes in procurement and distribution rules. The number of fertilizer farmers has access to varies widely across states. Though Anambra and Bauchi have similar numbers of farming households, in Anambra, the amount of federally procured fertilizer per agricultural household is on average about one-tenth of a bag (50kg) compared to three bags in Bauchi”.

Because the government fertilizer is usually diverted to the northern part of Nigeria whenever it arrives, we are left to decide whether to grow our crops without fertilizer or buy from the open market which is quite expensive.

The National Fertilizer Policy for Nigeria, adopted in 2006, is comprehensive and has the broad objective of promoting farmers’ quick access to sufficient quantity and quality of fertilizers at competitive and affordable prices. It also outlines the direction of government in the following areas: fertilizer production, international trade, domestic marketing, research and development, quality control, environmental impacts, farm use and government institutions. The implementation of some of the principles in the policy documents has been neglected.

Although available data shows that Nigeria has sustained an excess fertilizer supply with increasing fertilizer consumption over the years, these fertilizers are not available to the farmers for use on their farms. As presented in the table below, the erratic pattern reflects the inconsistency of government policy on fertilizer imports. Unfortunately, local production of fertilizer in Nigeria is on the decline, while consumption/demand is high. Although Nigeria’s importation of fertilizer is rising slowly, it poses serious concern that there may not be even enough fertilizer to use in the subsequent cropping years ahead.

Mr Edibo told The Insight that the government needs to live up to their promises to farmers, as farming had not been profitable for them over the years due to poor yield.

Another farmer Alaji Umoru, the Chairman of Cocoa Farmers Association, Kogi State chapter, decried the inaccessibility of farmers to the government’s subsided fertilizer. He said he had been farming for over 10 years but had been patronizing the open market for his fertilizer needs.

The government fertilizer programme was full of self-advertisements and an avenue for the agencies of government to take up money from farmers.

Umoru said,  he understood the importance of fertilizer to crop production and had been making efforts to buy from the open market which, of course, was expensive to afford. According to him, “because the government fertilizer is usually diverted to the northern part of Nigeria whenever it arrives, we are left to decide whether to grow our crops without fertilizer or buy from the open market which is quite expensive. We have been extorted several times by agents of government promising to supply fertilizers to farmers and they never did.”

Need  to tell ‘naked truth’ about fertilizer in Nigeria

An expert and agribusiness consultant, Professor Aribido Samson of the Prince Abubakar Audu University, Anyigba, claimed that the government fertilizer programme was full of self-advertisements and an avenue for the agencies of government to take up money from farmers.

Professor Samson suggested that “in addressing the problem bedevilling farmers’ accessibility to subsided fertilizer, a forum of farmers and agencies of government, their principals and relevant stakeholders must be staged. in such a programme, ‘naked truth’ will be told.”

He further suggested that farmers should be contacted directly instead of using ‘corrupt agents’ with necessary information as to when and where to pick up their fertilizers. Further, he said individual farmers should be selected and verified using their Bank Verification Number(BVN) and National Identity Number (NIN). Upon verification, the farmers should be allowed to pick up fertilizer from designated partners. Professor Samson recommended that fertilizer should be subsidized at production so that it can be easy for farmers to afford.

House of Reps calls for probe of failed fertilizer subsidy

As a result of the controversy surrounding fertilizer subsidy, the [iii]House of Representatives, in 2021, asked its committee of agriculture to probe the scheme. At the hearing of the motion Shehu Koko, who represents the Maiyama/Koko/Besse federal constituency, claimed that the Federal Ministry of Agriculture and Rural Development did not inform the farmers of the registration for subsidized fertilizer and that the ministry further failed to liaise with Kebbi State government, as well. The lawmaker alleged that the agriculture ministry, “engaged private enumerators for the exercise who also did not inform the Government and people of Kebbi State.” It is not clear what the outcome of the probe was, but a year after it was instituted, farmers in Kogi State have continued to lament the lack of fertilizer to enhance the yield from their farms.

This report was first published on The Insight

[ii] Why is fertilizer important for feeding the world? | Yara International