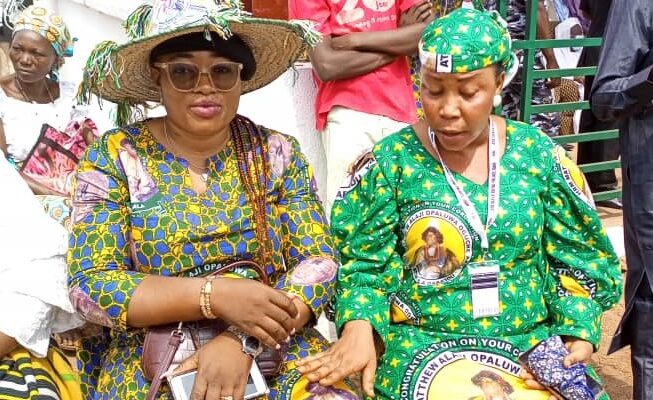 The Executive Vice Chairman of Olamaboro local government area of Kogi state, Hon. Blessing Aishat Ekele has congratulated His Royal Majesty, Mathew Alaji Opaluwa Oguche Akpa, for the successful completion of all the rites associated with the stool of his ancestors and installation as the new Ata Igala by Governor Yahaya Bello.

In a statement made available to journalists in Lokoja on Saturday, Hon. Ekele stated that the epoch making installation ceremony of His Royal Majesty as the new Ata Igala in Idah on Friday is a watershed in the history of Igala nation.

She said the coming of Aju AmeAcho ruling family on the ancestral stool of Igala nation will enhance  fairness, firmness and fruitfulness in the kingdom.

“Our joy knew no bounds. Our eyes shed tears of joy. Fears left our heart of hearts. Confidence returned. Light of security, hope, development and sense of belonging filled the cloud of Igala nation”, said Hon. Ekele while thanking God and ancestors of Igala nation for making the event possible in Igala Kingdom.

She prayed for wisdom and wished the new Ata Igala a successful reign in the kingdom.

The traditional stool was graded to 2nd class status to fulfil the yearning of the Igah community in Olamaboro council since 200 years ago.

She said the presentation of staff of office to Igah community graded monarch has made her a fulfilled person.

“Today, our collective prayers have been answered in our time. To God be the glory,” she said.

She prayed to God to imbue the monarch the needed wisdom to carry out his duty in the community, even as she wished him a peaceful reign on the stool.

Spread the love
Tweet
Previous PostRep Halims Urges 28th Atta Igala to be Father to All, Assures Monarch of Great Reign Next PostStaff of Office: Elulu of Mopa Congratulates Alamuro