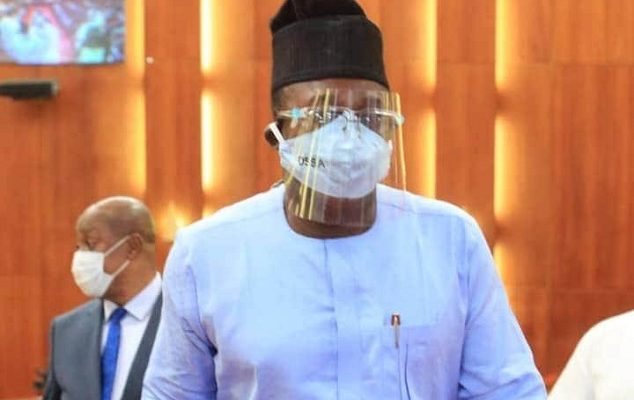 For a long time now, Senator Smart Adeyemi has been in the national kleiglights,  after serving as one time president of the Nigerian Union of Journalists, NUJ.

He was from there to make his mark in politics, joining the murky waters and seeking a Senatorial seat under the platform of the People’s Democratic Party, PDP from which he won in a year (2007) regarded as one of  our worst electoral moments in the history of this country. He was to win again in 2011, this time around in a much saner electoral clime . However, in 2015  he lost to Nigeria’s latest maverick, Dino Melaiye who floored Adeyemi and ended his dream of going to the Senate for a third term then.

Dino, typical of the oscillating nature of a number of Nigerian politicians was to later take his maverick nature to the PDP and like that Eddie Murphy movie, ‘Trading Places’ swapped platforms with Senator Smart, who again received a trouncing forcing upon the people of Kogi West another four years for Melaiye until the courts thought otherwise and ordered a rerun between the “bad” and the “worse off” Kogi  West could present to Nigerians, that election did come and this time Senator Adeyemi  outsmarted the Dino.

Readers will also recall that prior to this period, Senator Adeyemi in what seemed like a bout of loquaciousness had labeled Governor Okezie Ikpeazu of Abia State as a drunkard on the same floor of the Senate, now much as I am not a fan of  Ikpeazu’s shambolic style of governance and I in my other moments grieve for the people of that state owing to the bad examples they have had as governors since 1999, I believe that there is a level of language expected of a parliamentarian who is expected to be a statesman in and out. Calling  a serving governor a drunkard on the floor of the Senate is unstatesmanlike.

This time, Senator Adeyemi is not in the news for a bill that would put smiles on the faces of Nigerians, nor was he in the news for calling another serving governor this time around a chimney or womanizer, nope, he is in the news for caterwauling on the floor of the Senate where he sought to entertain Nigerians with  his latest discovery  which was rather a histrionic laden speech or ramble. In summarizing  such a speech, he alleged that what the nation was going through was the worse instability that the nation had faced, he alleged that the nation’s security architecture had collapsed and that the nation ought to forget ego and turn its eyes to the international community, seeking foreign support as no place in Nigeria was safe at the moment, despite the billions spent on securing the state.

Now there was nothing entirely wrong in what Senator Adeyemi nearly cried about, the nation truly is facing perilous times, no doubting but it is not in his place to assume such moral postures, as he is very much part of the problem the Nigerian society faces.

If what Senator Adeyemi had said in the floor of the Senate had been stated by a Senator Dansaudu, Idris Kuta, Mike Ajaegbo or Uche Chukwumerije, Ken who really cared more for the nation than for their careers then yours sincerely would have nodded in total agreement, but not Senator Adeyemi.

Where was Senator Adeyemi when money meant for soldiers , arms and equipment were careened off into personal accounts.? He was a serving Senator then cheering PresidentJonathan while Boko Haram carved a caliphate for themselves the size of Belgium.

Let me ask how much does Senator Adeyemi as a sitting Senator earn as a salary? What efforts has he made to berate his fellow senators on how much he and his other colleagues rip off Nigeria. Does he not know that cutting just 40 percent of their £37,500 salaries  and a number of other perks is enough to employ 50,000 more policemen and 10,000 soldiers? Can he point out to his constituency projects since 2007 and can it be matched with the funds provided for them, that is if they exist sef!

What beats me hollow is that the same people who are readily responsible for the nation’s many illnesses will just wake up and begin to beatify themselves as saints. Senator Adeyemi despite his calling as a journalist cannot in whatever way exonerate himself from the rot in the system.

Even at a time when a number of our boys are dying in the field and giving Boko Haram a run for their money, is it then fair for Senator Adeyemi to write off the entire security architecture as having collapsed?  I am further rankled when he calls for foreign support, as a proud Nigerian I take that as an insult!

The insecurity we are presently witnessing is real, but  let us ask, what policies led to the unemployment of millions of Nigerians, what sort of legislation led to the destruction of the middle class, where did a number of these bandits and criminals get the guns and arms used to terrorize Nigerians today, can the likes of Senator Adeyemi genuinely point to others without much pointing to himself?

For me Senator Adeyemi’s speech was nothing else but hypocritical!