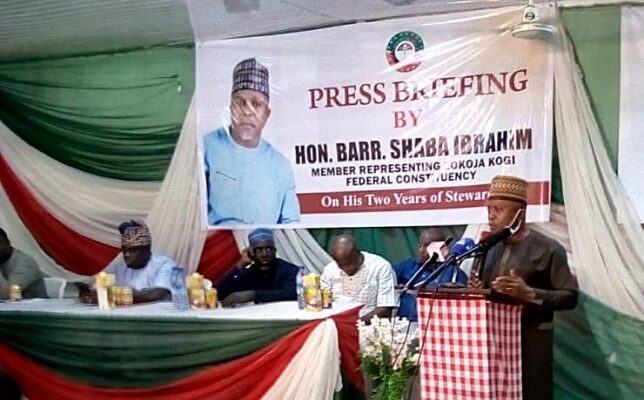 Member representing Lokoja-Kogi federal constituency in the House of Representatives, Barr. Shaba Ibrahim, has re-affirmed his loyalty to the Peoples Democratic Party (PDP).

Speaking at a press conference to mark his two years of representation in the green chambers in Lokoja on Saturday, Shaba said he will never decamp to the ruling All Progressive Congress (APC), saying such decision would not only be suicidal but a betrayal of the confidence reposed in him by the electorate.

“I have been confronted by this monstrous question right from the day I was inaugurated. I got calls from people I don’t know. I received an anonymous text message which read thus ‘Barrister Shaba, you cannot afford to lose the respect for those who look up to you for political survival.’

“That anonymous text message touched me I must confess. I have been pressured from Abuja and many more to join the APC. I could come up with many excuses to join the APC because I will be in the corridor of governance both at the local and federal levels.

“With that text from that anonymous person, I concluded that it is better to be on the path of truth. Looking at it holistically, and my contract with the people, this be a total betrayal if I defect to the APC. There won’t be any single reason known to me, for now, to embark on such a suicidal decision to defect to APC. I choose my friends and I choose them carefully. The life am leaving is out of choice and not want. I believe when you grow sight, let it reflect on your giving and not appreciation,” he said.

He commended the PDP on the recently conducted convention, adding that the party is set to rescue Nigeria come 2023.

Giving account of his stewardship, the federal lawmaker said within two years at the National Assembly, he had met his constituents’ expectations through execution of significant programmes.

Aside making provision for 150 GCE forms to deserving students and supporting 400 people with monthly stipends, Shaba said he has assisted the youths with employment opportunities in various Federal Government agencies and given scholarship award to students of tertairy institutions, among other things.

Others highlighted by the lawmaker includes provision of multi million naira herbicides to farmers across all the 21 wards, N10,000 scholarship to over 500 students studying in various institutions of high learning in the country from Lokoja/Kogi Federal Constituency.

Shaba added that he also embarked on construction of clinics and rehabilitation of rural roads to ease movement of constituents.

“I promised to initiate programmes to alleviate poverty through youths empowerment, job opportunities for women and graduates and acquisition of fishing nets for fishermen, among other things. My motive for these is because of the economic situation in the country, where an average man cannot afford the normal three square meals,” the lawmaker said, noting that the best way to move the society forward is by teaching the people how to fish instead of giving them fish,” he said.

Shaba appealed to the people of his constituency to be patient and remain steadfast as they will enjoy more dividends of democracy from him.

While thanking the people of Lokoja/Kogi Federal Constituency for giving him the mandate to represent them, he promised to continually strive to attract dividends of democracy to his constituency in particular and the state through robust and effective representation.

Spread the love
Tweet
Previous PostMopa Community Appeals to Gov. Bello Over Grading of Traditional Rulers Next PostThe Problem of Igala Nation is Beyond Traditional Regalia