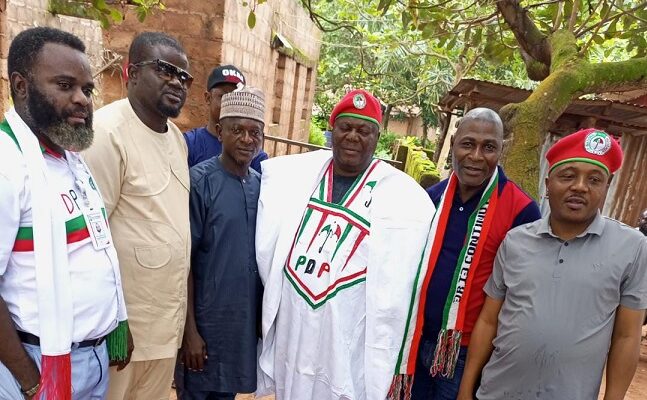 Ahead of 2023 general elections, the Peoples Democratic Party (PDP) has vowed to rescue Kogi state from the ruling party’s maladministration.

The State Chairman  of PDP National Youth Movement (NYM), Amb. Ahmed Suleiman made this known during the inauguration of the movement’s local government executives and ward coordinators for Dekina and Bassa LGAs in Ogbaloto on Saturday.

Suleiman decried the spate of insecurity in the state and across the nation, adding that All Progressives Congress (APC) has failed Nigerians in all ramifications.

He expressed delight at the turnout during the inauguration, stressing that it shows the people are resolute in their determination to liberate themselves in 2023.

“The turnout and enthusiasm here shows total and display of readiness to liberate self and rescue our dear state and nation from the jaws of poverty, maladministration, misrule, insecurity in forthcoming 2023 polls,” he said.

Young men and women from the 22 wards of the two local governments were charged with the responsibility of reaching out to eligible voters through conscious sensitisation and awareness on the dire halt the mass suffering imposed on the people by APC.

Spread the love
Tweet
Previous PostOkene/Ogori-Magongo: My Journey Into Politics for Development of Our People, Communities - Tijani Ozigis Next Post2023 Presidency: Kogi Will be Fully Mobilized for APC - Arc Amdii Assures Shettima