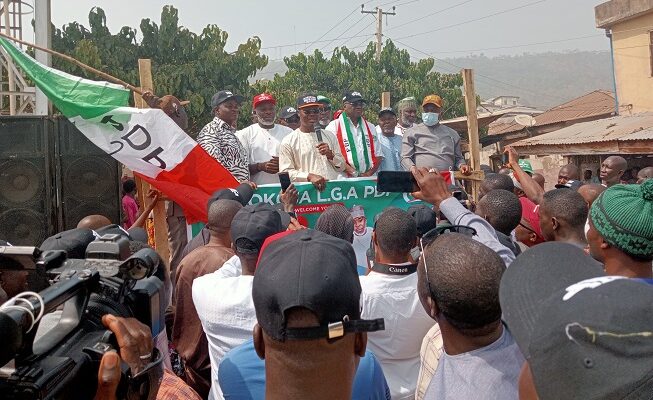 Ogbeha, who represented Kogi West in the senate between 1999 and 2007, made this known when received a former Speaker of the Kogi State House of Assembly, Rt. Hon. Ahmed Umar Imam, who recently defected to the party from All Progressives Congress (APC).

He promised the electorate that the party will not take Kogi resources outside the state, adding that “PDP will not take your money to bureau de change.”

“Alfa Imam is welcome to PDP. I must thank him for his foresight, empathy and courage. I call on all lovers of peace and progress to come out of their hiding places and join PDP.

“When PDP were in power, many of you have commercial vehicles to do business. Now, a bag of rice is over N45,000. We can’t continue with this wicked administration called APC.

“PDP will not take your money the bureau de change just the way APC has done in this Country. So it is time to change them from State to the national level,” he said.

He assured the new defectors that there will be no discrimination or factions, adding that PDP will always welcome genuine individuals who wants the best for Nigeria.

Ogbeha charged Kogites to go and get their permanent voters cards (PVC) to kick out the bad leadership of the APC administration.

The immediate past Speaker, Kogi State House of Assembly, Rt. Hon. Alfa Imam defected from the ruling All Progressive Congress, (APC) alongside over 3000 members to the Peoples Democratic Party (PDP) at the event.

Leading thousands of APC members from Lokoja Local Government Area in Kogi State to the opposition party, the former speaker said the ruling party has failed the country.

Imam noted that he was overwhelmed with the warm reception given to him by the PDP, stressing that he stayed far too long with the ruling party who he described as a complete failure in Nigeria.

The former Lawmaker said their movement to PDP is not seeking for an alternative to the APC but rather making a move to a party that has structure and organized leadership.

While reiterating that the APC lacks leadership, he said he thought he could stay in APC to correct the wrongs in the party, but was not successful.

He recalled that in 2014, they campaign against PDP but were perplexed that, Nigeria has witnessed more hell under the ruling APC.

Imam promised that PDP will win convincingly in next month general election adding that, his journey to PDP is a privilege and not a right.

“I am happy to leave that toxic environment (APC) to a good environment, PDP. We will take over Lugard house,” he added

On his part, serving lawmaker representing Lokoja/Kogi Federal Constituency in the House of Representatives, Hon. Shaba Ibrahim said the APC will regret loosing the former speaker to the PDP.

“I wonder how he was able to cope in that toxic environment called APC. The reasonable person in their midst they allow him to go. We are going to dislodge all those that took us from top to bottom. Those who has made life unbearable for us in our state, we will send them packing” Hon. Shaba said.

He charged supporters to ensure that they sweep the APC out of power.