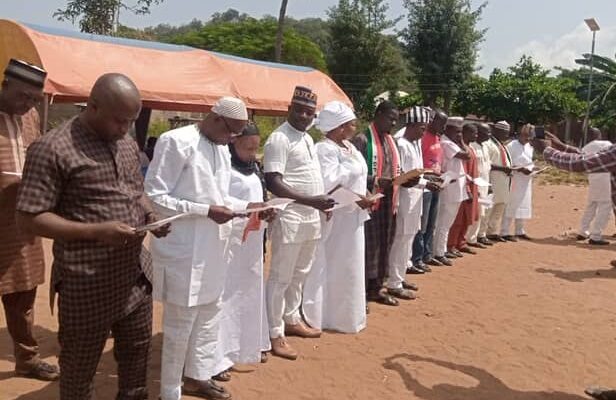 The Peoples Democratic Party (PDP), Ajaokuta local government chapter, has declared its readiness to win elections at all levels in 2023.

Speaking at the inauguration of new local government and ward executives of the party on Thursday, the party chairman, Abdullahi Bala, said PDP has been repositioned to rescue Ajaokuta, Kogi and Nigeria from economic woes, insecurity and corruption perpetuated by the APC led government.

He said the quality of politicians defecting to PDP from across the country is a confirmation that Nigerians have seen the light and they are ready to vote out the party whose government has brought untold hardship on them.

“I promise to run an open door administration where we shall work together as a team to put Ajaokuta LGA on the path of progress and development. Ajaokuta LGA will not be left out by God grace. We should take this message to everywhere, that PDP is back, better and stronger.

“It is important to note that politics is a game of numbers, therefore, we should reach out to the aggrieved politicians in other political parties, our friends and relations that are not members of PDP, to bring them to join the party before 2023 general election.”

“All the Local Government and Ward Party Executives inaugurated today, should go to their respective Wards to work and ensure that PDP win their Wards in all the future elections,” he said.

He commended the immediate past Executives under the leadership of Mall. Lamina Acheruku and other party leaders for their services and commitments to the growth of the party in the area.