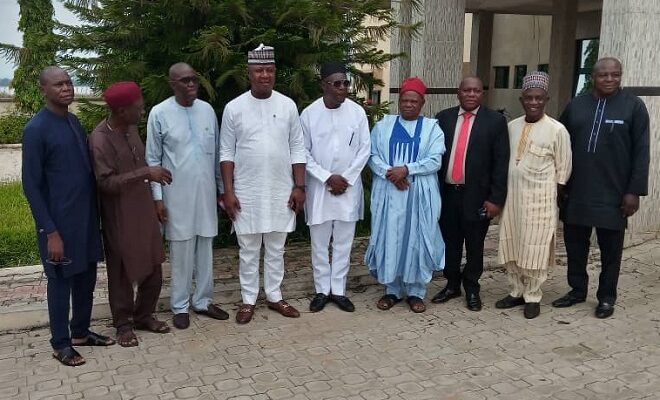 The Chairman, Omala Local Government Council in Kogi state, Hon. Ibrahim Aboh has appealed to the displaced victims of Bagana crisis to return home as he has put necessary security in order to guarantee their safety .

The Chairman gave the assurance when the committee on the resolution of the lingering Bagana crisis submitted their report to him on Thursday in Lokoja.

The chairman who commended the committee for their painstaking efforts in profering solutions to the crisis, said he will study the report with the aim of implementing it for the overall interest of the people.

He lamented at the crisis that has taken tolls on the people and their economic lives, urging the belligerents to lay down their arms and embrace peace.

He disclosed that he will set up review committee to understudy the report in order to make workable input that will permanently resolve the imbroglio.

He assured the people that Governor Yahaya Bello is working assiduously to end the senseless crisis as he had directed the setting up of the committee.

According to him, he is confident of the capacity and integrity of the members of the Committee and promise to forward the final report to Governor Yahaya Bello for implementation.
He commended the Ata Igala , HRH , Matthew Alaji Oguche Akpa and Ojogba of Ife HRH,Boniface Musa for their positive concern at resolving the over a decade crisis that has destroyed property worth millions of Naira and sources of livelihood of the people.

He noted that while arriving at the conclusion, the committee adopted a proactive methodology to enable her to look at the historical perspective, the legal implications and the natural justice and social economic variable to influences the crisis.

Col. Babanawa added that the committee has identified the relocation of traditional stools to their domains, and for the country to take decisive action on the collection of revenues from the town as a panacea to the clashes.

The committee specifically directed the Onu Omagede, Chief Salifu Anyebe and his counterparts at Ihankpe to immediately relocate their palaces to their respective domain and to recognise the constituted traditional institution in the order of hierarchy.

He urged the Government to provide both conventional and unconventional security apparatus to forestall incursions of militias from the neighboring states.

He told the chairman to always call on the committee and well meaning sons and daughters of the council whenever their advice is needed and urged him to discharge his duties without fear or favour.

It would be recalled that the Bagana crisis that started as Farmers and herder, snowball into clannish clashes that has reduced the town to a ghost, which in an attempt to proffer solution informed the 11-man committee.