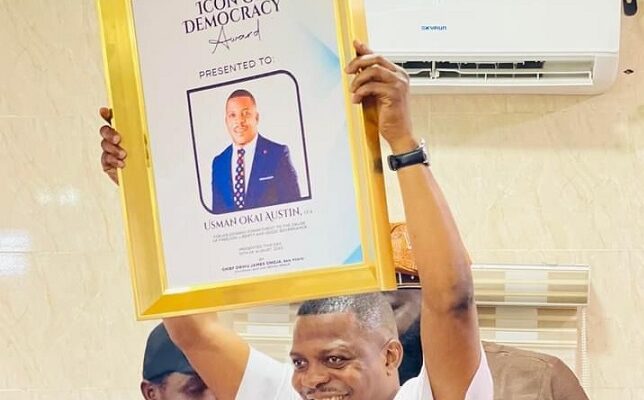 The House of Representatives candidate under the platform of the Peoples Democratic Party (PDP) for Dekina/ Bassa federal constituency, Comrade Usman Austin Okai, has assured the people of his constituency, Kogi State and Nigeria at large of good governance that will bring positive change if elected.

Comrade Usman Austin Okai made the promise on Wednesday at Bar and Bench House, Wuye Abuja in response to the conferment of ‘Icon Democracy’ award on him.

He paid glowing tributes to the former federal lawmakers, reassuring them of more dividends of democracy in the area.

Okai said his representation at the National Assembly will rejig both the economic and social lives of the people of his area.

Comrade Okai reminded the people of Dekina/Bassa and Kogi State at large that he had been proven beyond imagination, in view of his struggles for good governance across the state and Nigeria at large, promising that he would do more if given the peoples’ mandate.

He expressed worry over lack of representation of the people at that level, saying his intentions is to cover the dearth and gap of underdevelopment bedeviling his constituency, and the state at large.

The House of Representatives candidate said all hands must be on deck to restore not only good governance, but economic and social emancipation of the area.

Earlier, the citation of Usman Austin Okai, which received a standing applaud from the cheering crowd, was read by Comrade Isah Haruna.

The event which was well attended by party’s leaders from Dekina/Bassa federal constituency also had in attendance Dr. Jeremiah Ekele and other well-wishers.