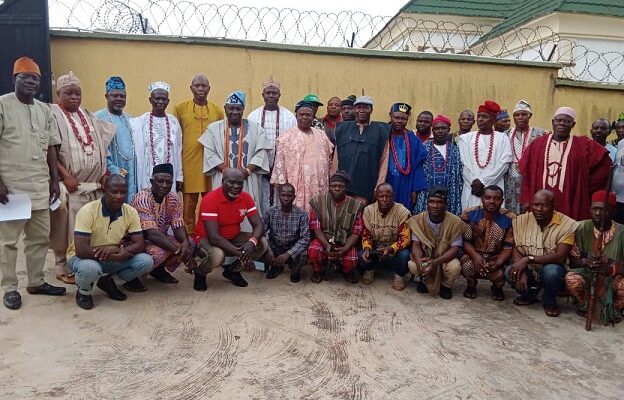 An its continued effort to foster unity and create distinct identity for the Yoruba speaking people of Kogi state, the Okun Development Association (ODA) has come up with and a unifying anthem and pleged.

National President of ODA, Barr. Femi Mokikan, made known when the body presented the new anthem to the Okun Traditional Council.

Mokikan and members of the National Executive Council of ODA presented the anthem and pledge on the sideline of presentation of motorcycles to local hunters, donated by illustrious Okun sons and daughters to the association for onward distribution.

Barr. Mokikan told the gathering of Okun Royal Fathers that the Anthem and Pledge were written and produced in Yoruba by a 15-man committee, following differences in opinions as to which version of the dialects should be the medium for the anthem.

“To avoid further damaging insinuations from various quarters of whether the anthem was rendered in  Owe, Bunu, Ijumu, Gbedde, Kiri, Yagba or Oworo dialects, the ODA leadership consulted with our Royal Father and got the go ahead to render it in Yoruba which is a common denominator across all the districts in Okunland,” he explained.

According to him, “Okuns are Yoruba descendants of Oduduwa in Kogi State, hence the production in the Yoruba language to promote oneness and unity of the people, and it is also in alignment with our desire to be realigned with our kith and kin in a restructured Nigeria.”

He said that any sub-group or district, such as Yagba, Owe, Bunu, Ijumu, Gbedde or Oworo that wishes to render the anthem and pledge in their dialect is free to do so. Notwithstanding that, only the Yoruba version will be rendered in any event or gathering involving all Okun people.

He added that the anthem is simple to master and should be given wide circulation while repeated recitation of the pledge, particularly by the youths, should begin the process of restoring lost core values in Okunland.

Responding, the Obaro of Kabba and Chairman Okun Area Traditional Council, Oba Solomon Dele-Owoniyi, on behalf of Okun Royal Fathers, lauded the initiative of ODA under Barr. Femi Mokikan, describing the anthem and pledge as historic and eventful.

He confirmed that at a stage in the process, the ODA approached him for his counsel and he insisted that ODA must not come up with any anthem that will create any further division in Okunland, whether real or imagined. He believes that an anthem in any medium other than Yoruba will not have the buy-in of many districts. He is delighted it was rendered in Yoruba.