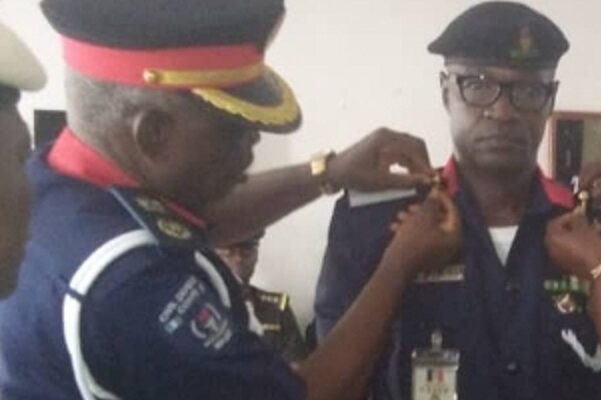 Newly decorated officers of the Kogi State Command of the Nigeria Security and Civil Defence Corps (NSCDC) have been charged to redouble efforts in the performance of their constitutional duties.

State Commandant of the Corps, John Kayode Oyinloye gave the charge at the decorations of 185 officers promoted by the Corps in the 2021 promotion exercise.

He said their promotion was as a result of hard work, diligence and the quest to move those qualified to their next rank in tandem with the constitutional mandate of the Corps.

He expressed appreciation to the board of the Corps and the Commandant General, Dr. Abubakar Audi for their efforts aimed at repositioning the Corps for maximum output.

In their separate remarks, the representatives of the Commander Army Records, Lokoja, that of the Commissioner of Police, Correctional Service, Immigration, DSS, NDLEA and the Sector Commander, Federal Road Safety Corps, Stephen Dawulung all advised the decorated officers to see their promotion as a call to additional responsibility which must be seen in the discharge of their official duties.

Responding on behalf of the promoted officers, Assistant Commandant of Corps, Irefin Paul expressed appreciation to the State Commandant for thier elevation in his time at the helm of affairs in the state.

He assured of the readiness of the promoted officers to put in more efforts at their duty post and justify the confidence reposed in them.

Highlights of the occasion was the decoration of 185 officers promoted to their new ranks in the State Command of the Corps.