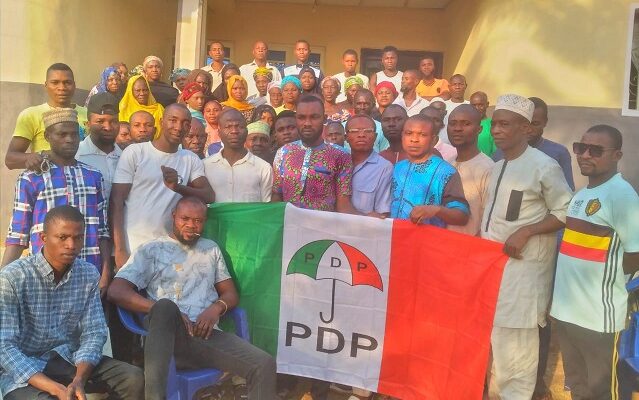 …says SDP Have Longed Collapsed Into the PDP in Kogi Central

The Peoples Democratic Party (PDP) and Natasha Akpoti-Uduaghan Campaign Organization (NAUCO) has denied media reports that claimed several of its supporters and members of the Social Democratic Party (SDP) decamped to the All Progressives Congress (APC) in Okehi local government of Kogi state.

In a statement issued by the media office of NAUCO on Thursday, the campaign council said the “antics of the Kogi chapter of the APC that has become an ineffective opposition party and threads on lies.”

The campaign organization noted that no member of the PDP decamped in Okehi LGA.

“The three persons paraded by the APC as PDP decampees have long before the APC so-called decamping event been suspended from the party for anti-party activities.

“On the other hand, the SDP supporters the APC also claimed to have defected to their fold have long folded into PDP a long time ago already. As it stands, it is safe to say that the SDP has since emptied itself into the PDP in Kogi Central,” the statement read.

“Recall that the SDP party chairman in the state, the Local Government Chairmen in Kogi Central and other the structures are of the party in the state collapsed into PDP earlier this year to support the PDP’s senatorial candidate, Barr. Natasha Akpoti-Uduaghan and are now consequently members of the PDP.

“Having overwhelmingly lost the support of the people, the APC is now desperate to to twist the available facts to gain cheap popularity when it is manifestly clear that they have lost every hope of winning the 2023 Kogi Central senatorial election.”

NAUCO said it is evident that the APC is jittery of the rising popularity of the PDP senatorial candidate “who has won the hearts of the good people of Kogi Central who are earnestly waiting to vote for her overwhelmingly in the 2023 senatorial election.”

“The desperate attempt of the APC to distort facts and use falsehood as a launchpad to gain goodwill and electoral fortunes cannot stop the impending defeat of the APC across board in the 2023 general election.”

However, the campaign council stressed that PDP is more united more than ever “to recover the locust days of the APC, with Barr. Natasha Akpoti-Uduaghan and every other candidate on its platform.”