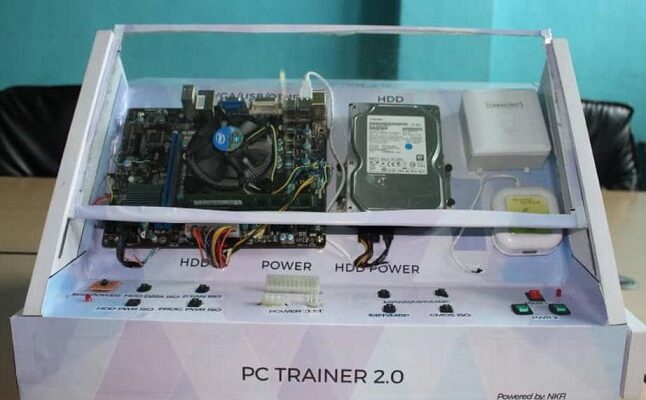 The Nigeria-Korea Friendship Institute (NKFI) recently announced a recent and novel invention of a PC Trainer technology which according to the institute could simulate hardware faults allowing students to easily understand and diagnose any type of computer faults and administer repairs.

In an announcement made by the Head of Information Communication Technology Department, Mr. Haruna Atabor Christopher, he hinted that the invention which was spearheaded by lecturers of the department was a rare advancement in computer hardware training across the globe.

He explained that “instead of our students engaging in their practical with live Personal Computers unit, the PC Trainer comes handy to help each student learn how to diagnose hardware faults and repair them efficiently, making them most proficient in that field”.

According to him the ICT department which comprises two major arms of computer software engineering and Networking and System Security is well equipped with gadgets, facilities and trainers just like other departments that would equip students with the relevant 21st century knowledge and make them competitively employable.

Reacting to the information, the Rector, Nigeria-Korea Friendship institute, Mr. Williams Charles Oluwatoyin noted that the latest invention was one amongst many of the ingenuity and the depth of innovation inherent in the institute which has positioned it amongst the top tier league of advanced technological and vocational institute.

He added that students who enrolled in NKFI would not only enjoy a suitable learning experience, but would benefit from its well exposed and creative lecturers while they would also get a deserving certifications that makes them suitable for employment within and outside the country.

Williams noted that the institute has entered into profitable affiliations other institutions like Confluence University of Science and Technology (CUSTECH) and world class technology firms like KIA, LG, SAMSUNG and others that would guarantee the institution’s top positioning, adding that with the needed support NKFI would revolutionize technological and vocational learning.

He, however, admonished well meaning individuals, politicians and traditional rulers to sponsor youths into the institute in a bid to improve their wellbeing and societal advantage.