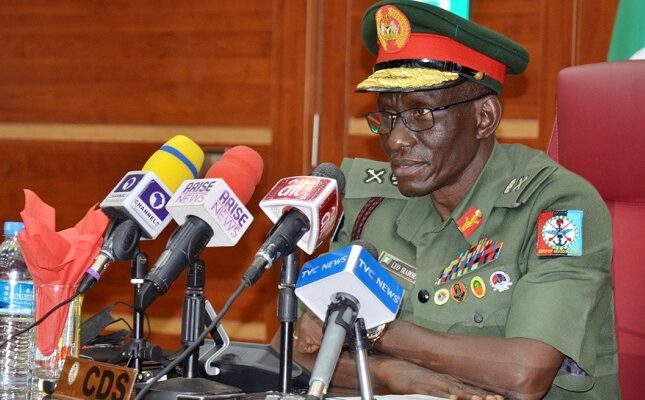 The Chief of Defence Staff, General Lucky Irabor, on Tuesday, revealed that one of the masterminds of the 5th June 2022 attack on the St. Francis Xavier Catholic Church, Owo Ondo State, has been arrested..

Speaking at the chief of defence staff parley with editors and media executives in Abuja, he gave his name as Idris Abdulmalik Omeiza.

The Army Chief said Idris Abdulmalik Omeiza was the mastermind of the terror attack on Saint Francis Catholic Church, Owo and a Police station attack in Kogi State that claimed the life of a police officer.

“Omeiza is one of the masterminds of the 5th June attack of the Catholic Church in Owo as well as the attack on a police station in Adavi Local Government Area of Kogi State that led to the killing of a policeman as well as weapons carted away,” he disclosed.

He was arrested on the 1st of August, 2022 at Eka Okehi Kogi State during an operation with other branches of security.

Also arrested on the 7th of August at Aiyetoro C in Ondo State is Idris Ojo, age 32, who the CDS describe as “one of the high profile ISWAP terrorist that escaped from Kuje.”

“Idris Ojo wasn’t done with his previous activities but was planning other deadly attacks along with his cronies before his arrest,” General Irabor said.

Recall that the suspects had on 5th June launched a deadline attack on the Saint Catholic Church, Owo, killing scores of persons and injured many others.

The Governor confirmed the arrest shortly after the Chief of Defence Staff (CDS), General Lucky Irabor made the announcement in Abuja.

Arakunrin Akeredolu spoke during a courtesy visit to his office by the leadership of the Nigeria Union of Journalists (NUJ) led by the Chairman of the Council, Prince Leke Adegbite.

Governor Akeredolu has also called on leaders of the Ebira community in the state to warn their young ones not to copy the bad venture of kidnapping.

The Governor said recent reports from victims of kidnap in the state have established that some Ebira indigenes are now involved in the unwholesome act.

He noted that the Ebiras have lived together with the people of the state peacefully for several decades, adding that they have always been supportive and hardworking.

“I want to use this medium to urge our brothers to concentrate on their farming trade. It will be unfortunate to know that the Ebiras in our midst are now involved in kidnapping.

“We are appealing to them not to copy bad thing. The traders selling by the road side should not become informants. We are not fighting them.

“We have seen their numbers, they supported and voted for us during elections. I will call their leaders and talk to them. Our brothers who were kidnapped on their way to Ikare, talk to them. They were taken to Ebira farmsteads.

“For me, we have lived together for too long for this to happen. I am ready to make any effort to ensure that the conviviality that we have enjoyed continues. But we are begging their leaders to urge them not to copy bad thing. They are in our midst , we are surrounded by them. The issue of security is key and it’s dynamic,” Governor Akeredolu noted.