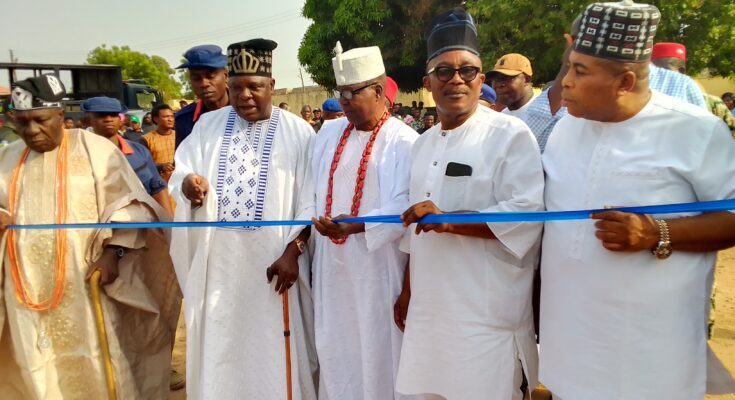 The Senator representing Kogi West in the National Assembly, Senator Smart Adeyemi, has distributed empowerment items worth millions of Naira to over 600 persons in his constituency.

He also gave out ten thousand naira to 40 people each from the seven local government areas in the zone.

While speaking at the presentation of the empowerment items to the beneficiaries at his Iyara country-home, in Ijumu Local Government of Kogi State, Senator Adeyemi, said the gesture was a way of appreciating his constituents for finding him worthy to represent them for the third term in the senate.

He expressed gratitude to the people for their support, stressing that he could only appreciate the good gesture by giving back to the people of Kogi West Senatorial District, who he described as democrats and patriotic politicians.

While distributing the items, yesterday, in Iyara, headquarters of Ijumu local government area of Kogi State, he said the gesture was his own way of showing appreciation to his constituents for finding him worthy to represent them at the Senate.

He said he had so far empowered over 8,000 members of the constituency to make them self-reliant.

“As you are aware in my manifesto, I pledged to focus on the priority areas of agriculture, education, women and youths empowerment, health, human capital development as parts of my commitment to deliver on the dividends of democracy to the good people of my constituency.

The high ranking lawmaker noted that he will continue to deliver on his campaign promises and urged his constituents to vote for the presidential candidate of the All Progressives Congress, Asiwaju Bola Tinubu.

The Chairman of Okun Traditional Council and the Obaro of Kabba, His Royal Majesty, Oba Solomon Dele Owoniyi, commended Senator Adeyemi for touching the lives of people across board.

According to the royal father, “any elected official that perform, we’ll continue to pray for him and whoever do the opposite, we’ll not curse him, but we would not pray for him.”

The Olujumu who described the lawmaker as an uncommon senator, commended him for bringing succour to his people at this period of economic crunch through various projects and empowerment items.

“Senator Smart Adeyemi has always been an outspoken leader who always fight against injustice, he is a progressive and fearless politician who touches the lives of his constituents, that’s why I always give him my support 100 percent,” the royal father said.

Dignitaries from walks of life attended the event including the Olu Gbede, Olushegun Oloruntoba, and others across the seven local government areas.

It would be recalled that Senator Adeyemi had in 2021 distributed empowerment items such as cars, motorcycles, grinding machines, refrigerators and instituted bursary award for over 350 students of higher institutions of learning from the seven local government areas of Kogi West.

The bursary award which gulped over N20 million is a yearly programme to support the students of Kogi West origins in higher institutions.