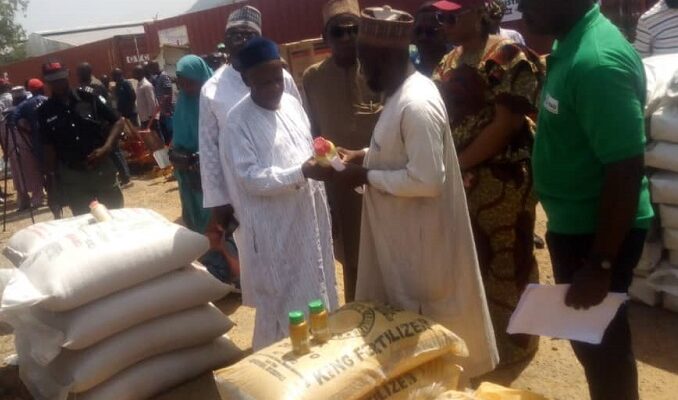 Government, through the Value Chain Development Programme (VCDP), has distributed inputs to rural farmers affected by flood disaster, for the 2022/2023 dry season farming in Kogi.

The distribution is on the platform of the Value Chain Development Programme supported by International Fund for Agricultural Development (IFAD/VCDP).

Represented by Mr Gidado Bello, the Programme’s Human Resource Adviser, Aliyu said the gesture was to cushion the devastating effects by the recent flood disaster on rural farmers and boost food security in the state.

According to her, VCDP has regular programmes to supporting rural farmers with subsidised inputs to improving their farming and farm production.

She explained that this particular input distribution was special because it was coming immediately after the unfortunate experience of flooding which had severely affected the farmers.

Aliyu said that the programme was put together to provide the immediate needed support to farmers to resume their farm business during the dry season.

She noted that the farmers should have made use of the raining season but at the point of harvesting their farm products the flood came and they lost everything.

The national coordinator stressed that the inputs would assist the farmers to get back to their business and recover some of their losses.

She added that the gesture would also give the farmers assurance that VCDP is there for them.

She encouraged the beneficiaries not to lose hope in collaborating and working with VCDP at all times, but be rest assured that VCDP would always be there for them.

She enjoined them to make good use of the inputs to encourage the VCDP to give them more, stressing the need to demonstrate efficient utilisation of what they had been given.

Aliyu commended the State Programme Coordinator (SPC), Dr Stella Adejoh, and her team for their impressive performance which had made Kogi one of the best out of the nine VCDP benefitting States in the country.

The State Commissioner for Agriculture, Mr David Apeh, commended the VCDP for the gesture, saying it would greatly cushion the flood effects on the farmers and the state.

Apeh reiterated the commitment of the state government to the payment of counterpart contributions towards agricultural development to boost food production in the state.

He urged the farmers not to be discouraged by the destructions of their farmlands, assuring that the diversification to dry season farming would help them regained their losses to flood.

The commissioner commended Dr Adejoh and her team for their efforts in meeting the yearnings and aspirations of the rural farmers.

Earlier, Dr Stella Adejoh, the SPC, said most of the farmers lost their farmlands due to the recent flood disaster that ravaged the state.

Dr Adejoh said that the input distribution was to encourage the farmers to quickly engage in drying season farming to help cushion the effect of the flood.

The SPC stressed that the  early distribution would encourage farmers to go back to farm early to start planting, so as to begin harvesting within the next three months.

”Even though they lost all their farmlands, giving them farm implement like the seedlings, reapers, planters, harvesters, sprayers, will help their production activities to improve on their yield.

”Without supporting the farmers at this pont in  time, you can imagine the level of hunger that the population is going to experience from January next year.

”So, this is to reduce that hunger, help increase the farmers’ income and reduce poverty,” she said.

The SPC advised the beneficiaries to use the items judiciously, saying the VCDP officials would be their to support them with good agronomy practices that would help improve their yield.

She urged them to use every item given to them, and not to be sold, saying the VCDP evaluation and monitoring team would ensure total compliance in order to achieve the set goals.

On his part, the ADP Managing Director, Chief George Ogirima, commended Kogi Government for living up to expectations of rural farmers.

Ogirima said that the farm inputs would relief farmers of additional expenses after flooding, while commending the VCDP for the robust partnership with ADP.

Speaking onbehalf of the beneficiaries, Mrs Mutiat Momoh from Lokoja, and Mr Muru Tijani from Ajaokuta, both thanked Kogi VCDP for coming to their aid with the inputs.

They promised to utilise the iterms to boost production and better their life.