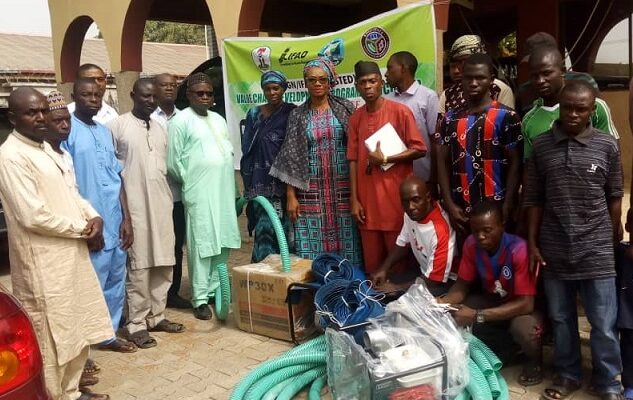 The Kogi State Value Chain Development Programme (VCDP) under the FGN/IFAD assisted project, has distributed irrigation pumps and tubewells to farmers to boost dry season rice production in the state.

The Kogi State Commissioner for Agriculture, Mr David Apeh, who flagged off the distribution on Monday in Lokoja, thanked the Kogi VCDP for the great feat.

Apeh, who was represented by Mr Okolo Isiaka, the Director Agric Services of the Ministry, urged the farmers to make judicious use of the items for their own benefits as well as their family, the state and the nation at large.

Speaking from his past experience in the state, the commissioner appealed to the beneficiaries not to sell the equipment but to take ownership of them.

Earlier, the State Coordinator of Kogi VCDP, Dr Stella Adejoh, said the pumps were distributed to farmers to enhance their productivity during 2021/2022 dry season.

She explained that the beneficiaries of the tools were farmers already captured on their data base in three out of five benefiting local government areas in the state for dry season rice production.

According to her, the three major rice producing LGAs are Lokoja, Ibaji and Ajaokuta along the river banks with favourable environment for rice production during dry season.

She stressed that the Kogi VCDP is intervening in five out of the 21 local government areas of the state in cassava and rice value chain, assuring that the program would be extended to other LGAs with additional funding.

She said that the beneficiaries had paid their matching grant of 30 or 35 per cent depending on their categories out of the total cost of the tools, while the government paid the remaining 70 or 65 per cent as the case may be through the VCDP.

Dr Adejoh emphasised that the essence of the matching grant was to enable the farmers show commitment and take ownership of the items given to them.

”We are not only giving you the tools but we are also supporting you by teaching you the best agronomy practices to increase your yield and enhance your production,” she said.

She commended the farmers for doing very well during the previous dry season rice production and urged them not to disappoint the government but to improve on their performances.

Dr Adejoh reiterated that the development objective of VCDP is to ensure food security, empower the rural farmers to lift them out of poverty and enhance the economy on sustainable basis.

She expressed her delight over the distribution of the tools to the beneficiaries and the impacts the VCDP had made in achieving its goals and objectives in the state.

Dr Stella thanked His Excellency, Governor Yahaya Bello, for his avowed commitment towards the project, noting that the God given Governor is always interested in making food available for the citizens.

Two of the beneficiaries, Mallam Kudu Muhammed, the Chairman of Kabawa Cluster, and Hajia Sekinat Yakubu, a female farmer, thanked the government and IFAD/VCDP for the gesture.

They promised that the tools would be used for the intended purpose to enhance their productivity.