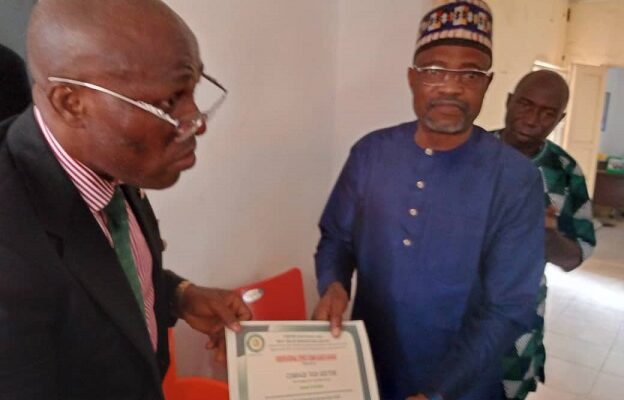 A non-governmental organization, the Centre for Ethics and Self Value Orientation, presented the award to him on Wednesday, for passing their leadership integrity test and enlisted amongst the top 500 highly ethical responsible leaders in Nigeria.

It was gathered that Comrade Tade Adeyemi, who was recognized for his immense contributions to humanity for bringing smile on the faces of local government workers against all odds, alongside the Kogi State Chairman, Nigeria Labour Congress (NLC), Comrade Onuh Edok dedicated the ward to God for giving him the privilege to add values to humanity.

The award according to the organizer was done after the conduct of its annual independent secret assessment programmes to 774 Local Government Areas in Nigeria.

Speaking on his achievement so far, the Kogi NULGE President explained that, under his leadership, Local Government workers have had course to remain grateful for struggling their course, despite some of the challenges in the State.

He emphasized that, the contributions of Local Government workers cannot be quantified adding that, workers at the grassroots deserves more than what they are receiving looking at the hash economic situation of the country.

Edoka said, Comrade Tade Adeyemi remains a detribalized leader who has sacrificed his life for others to survive in Kogi State.

Earlier, in his remarks, the Executive Director, Chief Executive Officer, Centre for Ethics and Self Value Orientation, Prince Salih Musa Yakubu commended the NULGE President for his contributions to humanity.

Yakubu said“We just want to say, thank you for the good work you and your entire team has done for the People and Local workers of Kogi State. Our organization has been in existence for the past 16 years.

“We are majored in conducting annual independent secret investigations and budget tracking using the instrumentality of conducting opinion polls, interviews with informants, distribution of multiple questionnaires and project site visitation without the knowledge of our targeted subject of assessment to avoid influence on our work.

“We expose corruption where necessary, appreciating those responsible for helping to change the narratives of mis-governance and corruption in both public and private sectors of Nigeria economy Thus, complementing our fight against corruption with the building of capacity of citizens towards eliminating the course of corruption in Nigeria.

“The whistle blowers of the centre who visited and conducted the same exercise thrice on your organization and to 200 similar non-state-actors organizations across the states of the Federation amongst others have recommended you for this award above hence the management approval” he explained.