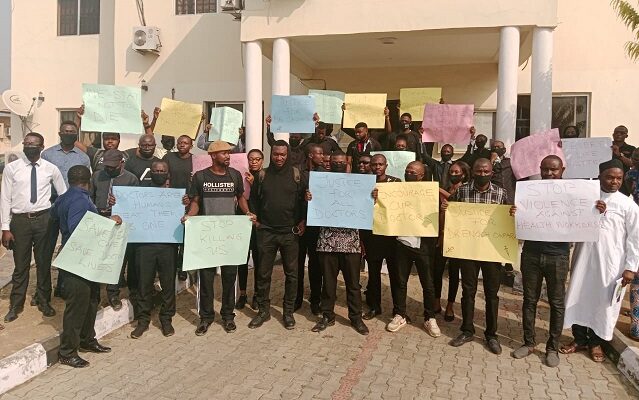 Kogi State chapter of Nigeria Medical Association (NMA) has called for justice for their colleagues allegedly killed in Delta, Anambra, Zamfara and other states across the country.

Chairman of NMA in the State, Dr. Olusola Baoku made the call in Lokoja when he lead members on a Solemn rally with placards carrying various descriptions including; Justice for all Doctors, Doctors are Humans; Treat them as one, We Stay not to die among others.

The walk started from the Federal Medical Centre Lokoja and ended at the at the State Ministry of Health.

Dr. Baoku noted with dissatisfaction the inhuman treatment melted at Doctors by Patients across the country, saying the murder of Medical Doctors in Delta, Zamfara and Anambra is demoralizing to members.

According to him, instead of joining their colleagues who had traveled out of the country for greener pastures, they decided to remain to salvage the already health system and save lives of Nigerians but this commitment has been greeted with inhuman treatment.

He maintained that most people don’t visit the Hospital early enough when feeling sick when the sickness can be better controlled but visit the hospital when the issue must have deteriorated and would want Doctors to perform miracles.

He said the solemn rally was in solidarity with others in the country and to call on relevant authorities to address the challenge as soon as possible.

Dr. Baoku called for tight security in hospitals across Nigeria as well as justice for its members killed while on the line of duty in different parts of the country.

He added that the working environment will continue to be scary for Doctors if the death of their colleagues is not investigated and perpetrators made to face the wrath of the law.

Dr. Baoku stated that although Kogi State is not part of the states where doctors are being killed, neither are doctors facing any form of insecurity here, but the killing of their colleagues in other parts of Nigeria, is a source of worry to them, hence this solidarity walk.

Doctor Olusola, attributed poor health seeking behaviors as responsible for avoidable deaths of patients, which in most cases, are misunderstood by family members.

While receiving the Mourning Doctors, the Commissioner of Health, Dr. Zakari Usman, represented by the Director of Medical Services, Mr. Segun Barnabas, assured of continued safety of doctors in Kogi State.