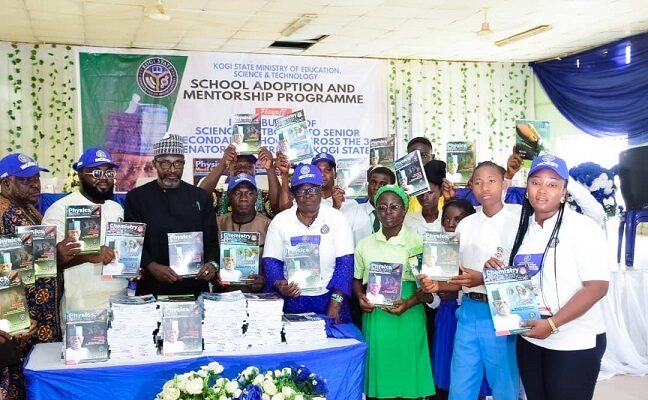 The Kogi State Government has appealed for more support from individuals and organisations for its School Adoption and Mentorship Programme to boost education in the state.

The State’s Commissioner for Education, Science and Technology, Hon. Wemi Jones, made the call during the flagg-off distribution of free Chemistry and Physics textbooks to public school students in Kogi West Senatorial district, on Thursday at Saint Augustine College Kabba.

The free science textbooks totaling 11,000 for the entire state, was sponsored and donated by Alhaji Ahmed Usman Ododo, the Kogi Auditor-General for Local Government, in support of the State Government’s school adoption and mentorship programme.

The commissioner commended the donor for boosting Gov. Yahaya Bello Administration’s effort to revamping education in the state.

Jones noted that the distribution of the textbooks had been inaugurated and distributed at Okene for Central and Idah for the Eastern senatorial districts.

The commissioner noted that the intervention by Ododo remained the biggest so far in the state since the commencement of the programme, saying it was massive across the three senatorial districts.

He, therefore appealed to individuals and organisations to support government’s efforts through the programme by adopting schools and mentoring of students for excellence to bringing back the glory of education in the state.

”You don’t need all the money to adopt a school or to mentor our students; sharing your experience alone with the students is enough motivation for them to boost their morale,” he said.

Jones stressed the commitment of His Excellency to continue to give utmost priority to education sector particularly the Science, Technology, Engineering and Mathematics (STEM).

The commissioner warned schools’ principals and teachers against selling the textbooks, saying government had set machinery in motion to apprehend any erring officials.

He advised the students to utilise the textbooks effectively by studying hard, saying examination malpractice is forbidden in the state.

He further warned all schools’ principals in the state against involvement in examination malpractice, saying defaulters would face heavy sanctions according to the state’s education law.

”We will kill ‘miracles centers’ in Kogi, we will halt all forms of examination malpractices, and some erring schools would be closed down,” the commissioners warned.

The unions commended the governor for given topmost priority to education in the state, and assured the government of their maximum support.

They further commended the education commissioner for the initiative and for his unprecedented achievements in the sector, saying history would forever remember him for the legacy.

On their part, the Authors of the textbooks, Engr. Yusub Ibrahim and Engr. Yusuf Isah, who are both Lecturers at FUTMINNA, said the leading feature about the books was its learner’s friendly, saying it was a good opportunity for the students and the teachers to utilise.

The authors commended the governor and the commissioner for partnering with them and for making the textbooks to see the light of the day.

In her vote of thanks, Hon Nana Raji, the Senior Special Assistant to the Governor on Vocational and Informal Education, appreciated all the relevant stakeholders for making the project a huge success.

She urged the students to make good use of the textbooks for their own benefits as well as fulfilling the donor’s good intentions.

Some students, Hannah Oloruntoba, Goodluck Osarumwenser, from Lokoja and Kabba/Bunu LGAs, who spoke on behalf of others, thanked the government and the donor for the gesture, and promised to utilise the books effectively.