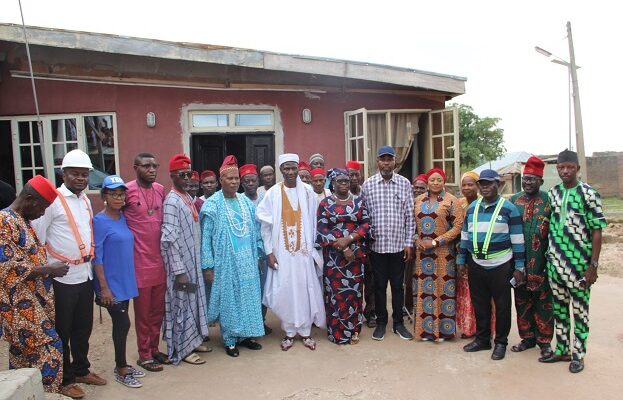 Kogi state government has reiterated it avowed commitment to rehabilitate Ekinrin-Adde-IfeOlukotun and Iyara-Odokoro roads in the western senatorial district of the state.

This was made known on Thursday when a delegation of Kogi State Government visited two roads in Okunland which has been scheduled for rehabilitation by the Governor Yahaya Bello led administration.

The delegation led by the Secretary to the State Government, Mrs. Folashade Ayoade also had the Commissioner of Environment, Chief Victor Adewale Omofaiye and Project Coordinator of NEWMAP, Barr. Ladi Jatto on the entourage.

Speaking at the Palace of the Olukotun of Ifeolukotun, Mrs. Ayoade said Kogi State Government is committed to the completing the rehabilitation of Ekinrin Adde-Ifeolukotun road before the January 2024 end of the present administration.

The SSG, who blamed the non completion of the Ekinrin Adde-Ifeolukotun road to neglect by the contractor, assured that the State Governor, Alhaji Yahaya Bello has promised to finish the road before leaving office.

The Commissioner of Environment, Chief Victor Omofaiye said Gov. Bello had directed that the roads be included in the Agro Climatic Resilience in Semi Arid Land (ACREsAL) Project.

Chief Omofaiye noted that though the roads are dare to the Governor, hence the approval, they are also important to the socio-economic lives of Okun people especially farmers.

According to him, ACREsAL which is a World Bank Project covers Agriculture, Environment and Water Resources aimed at mitigating ecological challenges.

The Project Coordinator of NEWMAP, Barr. Ladi Jatto on her part reiterated the commitment of her office in executing projects in line with global standard to serve Kogi people better.

The Olukotun of Ifeolukotun, Oba Shuaib Muhammed described the move to revisit the road as laudable, saying when completed, will bring succour to the sufferings of the people.

The Team also visited the Olu Adde of Ekinrin Adde, Olu Anthony Bamigbaiye-Idowu to brief him on the development.

Olu Idowu in his response expressed delight over the cheering news and prayed for the realization of the project in no distant time.

Spread the love
Tweet
Previous PostNUAHP Tackles MDCAN Over Position on Bill to Amend University Teaching Hospitals Act Next PostThe Ike’s; A Symbolism of the Conspiracy of the Elites Against the Defenseless Poor