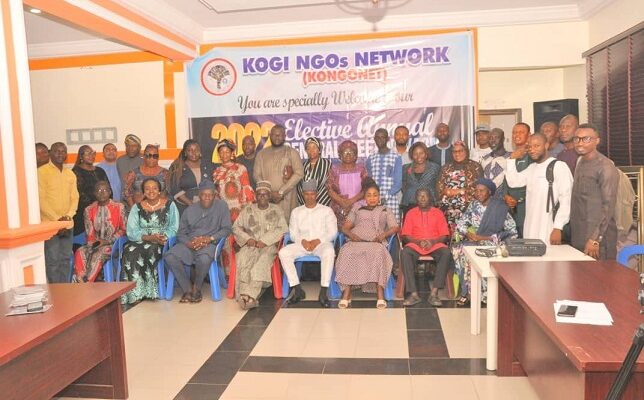 Coalition of civil society organizations, Kogi NGOs Network (KONGONET), has lamented over the continuous reduction in the quality of basic education across the state.

This was made known during the 4th quarter 2022 press briefing by KONGONET on January 5, 2023 in Lokoja.

Within the reporting period, a member of KONGONET, the Civil Society Action Coalition on Education for All (CSACEFA), through her state coordinator, said the state had neglected the welfare of primary school teachers as evidenced in the non-payment of full salaries to basic education teachers across local government areas of the state and non–maintenance of basic school infrastructures.

The coalition called on the state and local governments to immediately resolve the challenges and save the future of Kogi State children.

The press briefing addressed by Idris Ozovehe Muraina and Success Adejoh, Chairperson and Public Relations Officer respectively, KONGONET recommend immediate rehabilitation and support to 2022 flood victims who lost their sources of livelihoods, houses and properties including crops and farmlands to reduce the hardship on them.

The coalition of CSOs noted with dismay that well over a year, the Kogi state radio (FM 94.1) has remained in a perpetual state of dormancy despite several appeal to the state government to purchase the required transmitter for the only state-owned radio.

They reiterated calls on Kogi state government to purchase the required transmitter for the only state-owned radio in Kogi state capital and revive the radio station for effective information dissemination as the general elections draw nearer.

Reviewing the 2023 agriculture budget draft by the Budget Committee Group (BCG) with support from PIBCID/ActionAid Nigeria, KONGONET lamented the decline in the allocated funds to the agricultural sector.

“More worrisome is the observed consistent denial of funds to women in agriculture, even though it is captured in the state budget every year,” they said.

Small Scale Women Farmer Organization in Nigeria (SWOFON), Kogi State branch, and members of the state civil society Budget Committee Group (BCG) held a press –briefing within the quarter to issue a statement over the 2023 Kogi State budget and decried the paltry sum allocated to the agricultural sector.

SWOFON Kogi State opined that “In Kogi State year 2023 budget, Agriculture sector yet again got the least allocation compared to other major sectors that drives the social-economic development of the State such as Education and Health; Agriculture received the least at 5.30%.”

Kogi Budget Committee Group (BCG) called on the state government to review existing policies and framework on agriculture to facilitate increased funding and prompt release of budgetary allocations to the sector.

BCG also commended the state government for the allocation of N600 million to extension services and provision for post-harvest loses reduction intervention in the 2023 budget estimate.

SWOFON Kogi State and Budget Committee Group (BCG) concluded that if agriculture is to serve as a means of diversifying the economy of Kogi State as promised in the new direction blueprint of the Government of the State, then allocations to the sector is grossly inadequate and fund releases to the sector are too poor.

Spread the love
Tweet
Previous PostKogi Govt Queries Ohinoyi Of Ebiraland for Refusing to ‘Welcome’ President Buhari Next Post'Nigerian Youths Asked Me to Tell You That You Have Won', Yahaya Bello Assures Tinubu of Landslide Victory