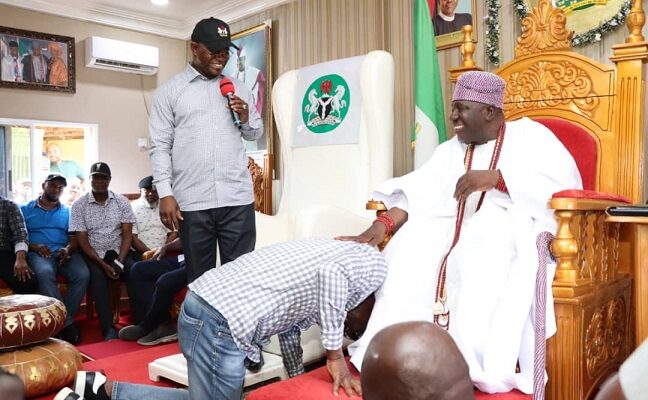 The Executive Governor of Kogi State who doubles as the leader of the ruling All Progressive Congress in the state, Alhaji Yahaya Bello has presented the party’s house of representatives candidate for Kabba/Bunu/Ijumu Federal Constituency in the 2023 general election, Rt. Hon. Matthew Kolawole to the Obaro of Kabba and Chairman Okun Area Traditional Council, His Royal Majesty, Oba Solomon Dele Owoniyi.

He solicited maximum support for the House of Assembly Speaker.

Speaking at the palace of the monarch on Monday, during the courtesy visit of, Gov. Bello commended the Kogi State House of Assembly under the leadership of Prince Matthew Kolawole for their belief in the cordial working relationship with the other arms of government which has enabled the new direction administration to have achieved much without any rancor.

Gov. Bello who was in Kabba to inspect road projects executed by his administration in the metropolis described the Speaker as a good and worthy representative who truly loves and wants the best for the people of the state, hence he decided to hold firm the legislative arm in support of the administration to deliver all the projects across the state.

“Your Majesty, I want to present one of your sons to you, our party candidate for Kabba/Bunu/Ijumu Federal Constituency in the 2023 General Election, Rt. Hon. (Prince) Matthew Kolawole, he is a good man, he has experience, he has shown competence and capacity, the state is pleased with him, I am presenting him to you to deliver him in the forthcoming elections,” he said.

He also praised the Chairman of Ijumu LGA who doubles as the  ALGON Chairman in the State, Hon. Isah Taufiq, and other chairmen who were at the palace urging the traditional rulers to cooperate with them in carrying out their assignment, stressing that he has given them orders to crush all criminals in and around their various local governments.

In his reaction, the revered monarch thanked the Governor for the quality of the projects executed so far in the area, appealing to him like the Oliver twist not to forget other critical roads in Okunland e.g, Kabba-Ogidi – Ayere road, Ekinrin-Adde – Ohun – Ife -Olukun road, Iyamoye – Egbagun – Ife – Okun – Ijowa road in Yagba East etc.

He said Ogidi is fast becoming an international tourists center receiving visitors on yearly basis hence the need for the area to have a good access road that is befitting.

He said his late father dropped a message for him through his mother before he died that whatever Governor Yahaya Bello wants, that exactly he should do hence the issue of the Speaker’s House of Representatives project is a done deal.