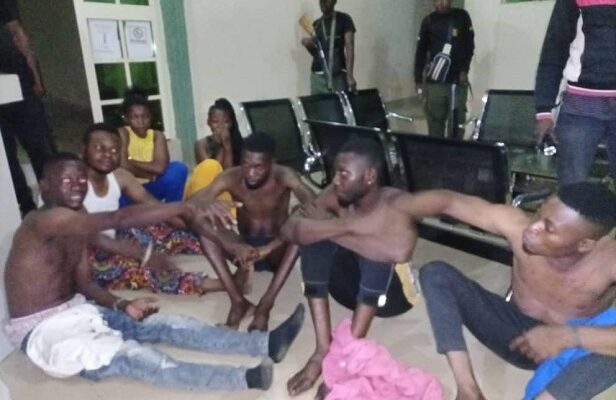 The Joint Task Force operatives in Okehi Local Government on Monday arrested a cybercrime syndicate who lodged at Ihima Guest House along cemetery road in Oboroke-Ihima.

The team which was led by the Chairman Okehi Local Government, Hon. Abdulraheem Ohiare who acted upon an intelligent security report.

According to reports the tactical operation which lasted for hours secured the arrest of seven Males; Four from Ondo state, Two from Ihima, One from Okene and two females from Adavi Local Government while gadgets including mobile phones and other accessories were confiscated.

Information released indicated that the suspect confessed to their involvement in defrauding people stating that they’ve been operating in Ondo State but recently relocated to Ihima in Kogi State to carry on with their nefarious deals while the two females revealed their involvements in Pornography videos including drugs and alcohol.

The Local Government Chairman noted that those apprehended were currently in the custody of the security agents helping with information that would lead to the arrest of others even as the Local Government Legal Team would approach a competent Court of Law before the Official Sealing of the so called Ihima Guest House.

The Council Chairman applauded the security agents for the success of the operation and more importantly Governor of Kogi State, Alhaji Yahaya Bello for making Security of lives and property of the citizens his administration’s priority.

In his reaction, the Chief Press Secretary to the Governor, Muhammed Onogwu expressed the opinion that the Local Government were the framework upon which the government structure was laid hence if issues of security were resolved effectively at that level, it would reflect positively on the state.

He noted that all sought of crimes were not permitted within the shores of the state and cybercrime was largely frowned against.

Onogwu noted that the continued efforts of the Kogi State Government to keep the momentum as the safest state in the country were so far yielding good results noting that the Governor has severally made a commitment to securing the lives and property of the citizens and make the state a no go zone for criminal elements.