Home News I Feel at Home in Kogi – Kwankwaso 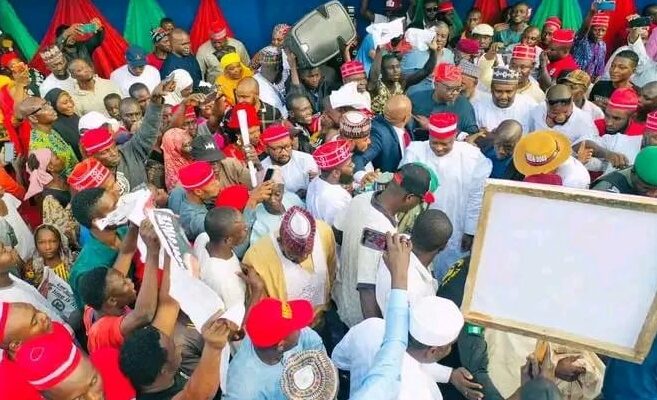 I Feel at Home in Kogi – Kwankwaso

The presidential candidate of the New Nigeria People’s Party (NNPP), Senator Rabiu Musa Kwankwaso has expressed gratitude to the people of Kogi state for the rousing welcome accorded him during his visit to the state on Wednesday.

Kwankwaso made this known while chatting with newsmen in Lokoja, the Kogi State capital, on Thursday after meeting with party faithfuls.

The former Governor of Kano State said he feels at home in Kogi having worked with the people in the past, especially during governorship aspiration of bosom friend, the late Prince Abubakar Audu, who was the gubernatorial candidate of All Progressives Congress in the November 2015 polls.

He recalled staying in Kogi state for 7 days, while taking charge of Prince Audu’s election. He added that the people of the state are warm, loving and hospitable.

The presidential candidate said Nigerians are tired of both the ruling All Progressives Congress (APC) and the Peoples Democratic Party (PDP) because the two political parties have been tested by the masses and discovered to be a bunch of failures.

Kwankwaso added that Nigerians needed a the paradigm shift which he and his party represents.

He stated that NNPP has offices in all LGAs and wards across the country, including Kogi state.

Answering questions on reports that his convoy was booed and pelted with stones in Lokoja on Wednesday, Kwankwaso said it was a mere conjecture.

“We are in Kogi state in continuation of our visits to states to verify and commission party offices. When I came into Kogi state yesterday (Wednesday), I felt there was no way I will visit Kogi and not check on the family of late brother and friend, Prince Abubakar Audu, to see how they are doing and pray for him, and that is what I did. Upon our return from Ogbonicha, we commissioned our offices here in Lokoja and had a very good meeting with party elders, women, youths and candidates of NNPP.

“When I heard the story about an imaginary attack, I asked my staff to confirm if anything like that happened. It didn’t happen. I was told that a young man came here to see me after we returned from Ogbonicha but was asked to wait because I was observing my prayers. He left and went to town with a spurious falsehood. If anything happened, it should be reported, but if nothing happened, why should that be reported?

“The reports can’t take away the gains we made during this visit. I am leaving this state as a very happy man,” he said.

Kwankwaso appealed to the federal government and ASUU to immediately close ranks and put an end to the lingering strike which has closed down public universities in the country, stressing that students should be returned back to classes as soon as possible.