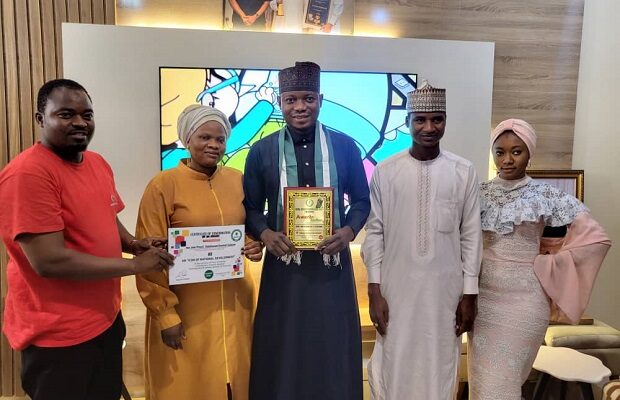 The Special Adviser to Governor Yahaya Bello of Kogi on Special Projects, Hon. Suleiman Abdulkareem Onyekehi, has received Award of Excellence as an ”Icon of Societal Development” from the National Association of Northern Nigeria Students (NANNS).

The National Secretary General of NANNS, Comr. Hassan Usman El-Yakub, with other Executive of the association jointly presented the award to Hon. Onyekehi on Friday in Lokoja.

In his remarks, El-Yakub said the Award was presented to Hon Onyekehi as a philanthropist and patriotic Nigerian in recognition of his outstanding performance and immense contribution towards societal development, and selfless service to humanity.

”In the course of our search for people of outstanding personalities who are giving back to the society and contributing their own quota to both societal and national development, we came across your name.

”After much consideration of the impressive recommendations, your name was adopted without much difficulties to receive this honour based on merit.

”Your exemplary lifestyle as a philanthropist and patriotic Nigerian are also part of your consideration for the award.

”We congratulate you as we welcome you into our hall of fame as an ICON of Societal and National Development,” El-Yakub said.

Responding, Hon Onyekehi  thanked the executives and members of the association for considering him worthy of the ward based on merit.

Onyekehi, who doubles as the State Focal Person for National Social Investment Programme (NSIP), described the Award as a ”rare honour and source of encouragement for him to do more”.

According to him, this singular honour by Northern Nigeria Students reminds me that as a public officer, people are watching us from far and near.

”As a youth in position of leadership and youngest State Focal Person supervising sensitive programs of the Federal and State Governments, I owe it as a duty to represent the youth of my generation by demonstrating capacity and ability to prove that young people can administer good leadership and make a significant difference.

”I am committed to do more,” he said.

He appreciated His Excellency, Governor Yahaya Bello for giving him the great opportunity to serve the good people of the state in that capacity as youth.

Hon. Onyekehi further commended the Governor being the youngest Governor in Nigeria for appointing young people to serve in his cabinet and at all levels of governance in the state.