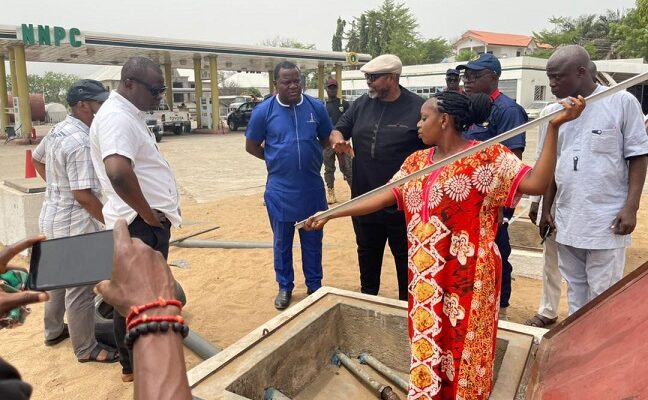 As part of efforts aimed at tackling fuel unavailability in the state, the Kogi State Government has commenced mass inspection of filling stations across Lokoja, the state’s capital.

The Ministry of Commerce and Industry, in collaboration with Ministry of Petroleum Resources, the Nigerian Midstream and Downstream Petroleum Regulatory Authority (NMDPRA) went on a city wide patrol to gain insights into the situation.

According to the State Commissioner for Commerce and Industry, Gabriel Olofu, the inspection was necessary because of the price hikes caused by drastic surge in the international energy markets which has created hardship for Kogites in recent weeks.

The Commissioner, Area Controller of NMDPRA and the Deputy Commandant, Head of Natural Access and infrastructure, Nigerian Security and Civil Defense Corps (NSCDC) led the team and uncovered some shocking discoveries.

The team discovered that some stations refused selling so they can take advantage of black markets.

They also discovered that some filling stations were operating illegally, without proper documentation. Stations were selling at high exorbitant rates.

The Area Controller, NMDPRA instructed the sealing off of illegal stations, reverted prices of stations selling above pump price and also confirmed underground tanks of stations who had fuel.

“A prime example is the NNPC outlet we are in right now, they are not selling above pump price.

“These are the kind of people encouraging the government. In fact, when the 40,000 litres load came, I was called to officially look at it.

“No matter the amount, they stick to the price of N165.

“If we have other outlets exhibiting this character, it will be great,” he said.

The Commissioner for Commerce and Industry, Hon. Yunusa Gabriel Olofu calls on residents to cooperate with government in its determination to resolve current scarcity.

“As Commissioner, my role is to help stimulate business(es) in the state. We don’t want people to suffer unnecessarily.

“We decided to go out with Department of Petroleum Resources (DPR) today because of the pains Kogites are going through. The truth is, if there’s no punishment, no one obeys law(s).

“You will notice that we had to seal off illegal stations, and also instructed those selling for exorbitant prices to revert back. The stations that were caught defaulting might even end up paying fine.

“We appeal to everyone to cooperate with the Government, as supplies will soon be everywhere.”