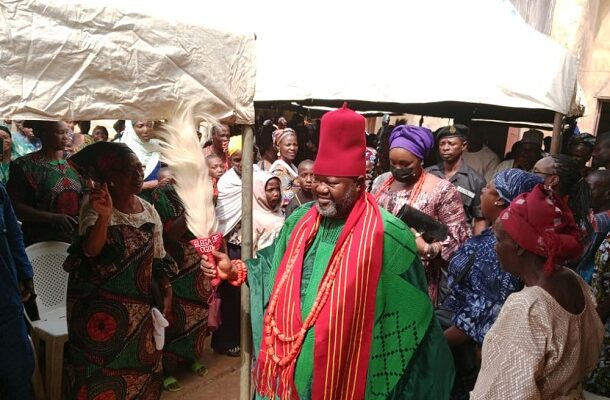 A former Director General of Nigeria Drug Law Enforcement Agency (NDLEA), Otunba Lanre Ipinmisho has been installed as the Elega of Ogidi land.

The Ologidi of Ogidi, Oba Rabiu Sule, who performed the ceremony on Thursday said the Elega chieftaincy title is one of the highest titles in the community and Okun land as a whole.

According to him, High Chief Lanre Ipinmisho deserved the recognition and elevation in view of his moral support to the development of youths, women and the entire community.

He noted that many youths, particularly in Ogidi community and its environs have been taken off the street and are now gainfully employed in NDLEA and other agencies.

High Chief Lanre Ipinmisho promised to use his new office to serve the people more and better particularly Ogidi, Okun and Kogi State.

The former NDLEA boss said before now, he had been conferred with honourary chieftaincy titles in several communities both within and outside Kogi State, but the Elega of Ogidi is a traditional title as with the installation, he would be representing his family and a section of the community at the traditional council meetings.

“Not everyone can take this, Elega of Ogidi is a serious office and I pray God to give me the strength to deliver to the people that have honoured me so that I can honour them,” he said.

Speaker of Kogi State House of Assembly, Prince Matthew Kolawole, while speaking with newsmen, congratulated the former NDLEA Director General on his well deserved Installation, saying it is a reward of hard work as well as greater call for responsibility.

Prince Kolawole tasked the new Elega of Ogidi land to use his wealth of experience to bear in the discharge of his new responsibility.

The Chairman of Ijumu Local Government Area, Alh. Taofiq Isa described the ceremony as eventful, saying the calibre of dignitaries that graced the occasion shows the credibility and acceptability of High Chief Lanre Ipinmisho.

Alh. Taofiq felicitated with the celebrant and wished him good health and wisdom needed to succeed in the task ahead.

Dignitaries from all works of life graced the installation at the palace of Ologodi of Ogidi land in Ijumu Local Government Area of Kogi State.

The personalities including; top management staff of NDLEA, politicians traditional rulers, family and friends were on ground to identify with the legal icon.