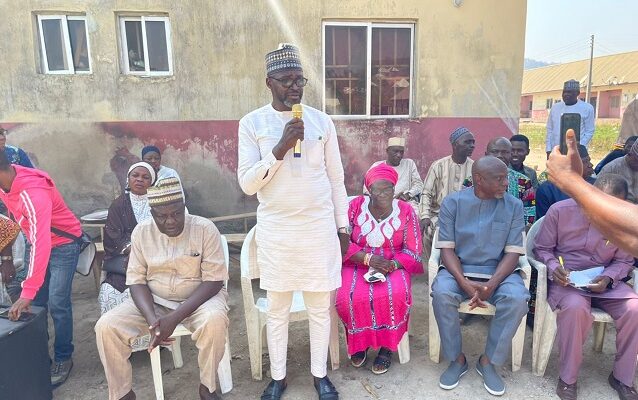 The Federal Ministry of Education has constructed a learning centre and donated it to the Internally Displaced Persons (IDPs) camp in Lokoja, Kogi State capital.

Speaking at the official handing over ceremony, the Minister of State for Education, Rt Hon. Goodluck Opiah, said the initiative was as a result of high number of out-of-school children especially in IDP camps across the country.

Opiah, who was represented by the Deputy Director, Basic Education in the ministry, Mr Ayo Omotomi, said that a high number of out-of-school children in refugee camps is inimical to the economic growth and advancement of the country.

”No nation can achieve sustainable development without the contribution of a greater percentage of her population.

”No nation can make meaningful progress with a high number of its youths being illiterate,” he said.

Opiah assured the federal government’s determination to ensure that school age children were enrolled and retained to reduce the escalating figure of out-of-school children to its barest minimum.

The minister said the ministry was set to identify school age children who were not in school, and ensure their enrolment in learning centres with close proximity to their camps.

Opiah urged all States to make further efforts and upscale the work that the federal government was doing to reduce the high number of out-of-school children especially in IDP camps.

In his remarks, the Kogi Commissioner for Education, Science and Technology, Hon. Wemi Jones, commended the federal government for the initiative for the IDP camps.

”We in Kogi, are people of gratitude and we appreciate the Federal Ministry of Education for the gesture. We are confident that better things would come to us from you,” he said.

Jones stressed that Kogi under the able leadership of Governor Yàhaya Bello, had placed significant premium on education which was why the state was running 30 per cent budgetary allocation to education higher than the 26 per cent recommended benchmark by UNESCO.

The commissioner stressed that Kogi under Gov Yahaya Bello’s administration had taken education to a greater level.

He, however stressed the need for the minister to mandate the contractor to ensure that quality job was done to maintain ‘Kogi standard’ in project execution.

The commissioner assured that the state government would make the learning centre a functional one, for the benefits of the out-of-school children in the area.

Jones appealed to the community to take ownership of the centre by taking proper care of it, and ensured that it was maintained and not vandalised.

On his part, the Chairman, Kogi State Universal Basic Education Board (SUBEB), Alhaji Suleiman Ndalaye, commended the federal government for the gesture towards the IDP camp in the state.

He assured that the state government would make proper use of the centre for the benefits of the out-of-school children in the camp.

In his vote of thanks, the Community Leader, Mr Henry Eriki, on behalf of the IDP, appreciated the federal government for remembering them in the area, describing ”as first of its kind”.

Eriki assured that the community would protect and maintain the learning centre for the benefits of their children.

Our Correspondent reports that the learning centre, located at Wada Flood Estate, 200 Units, Lokoja, was a block of two classrooms equipped with  desks and chairs.