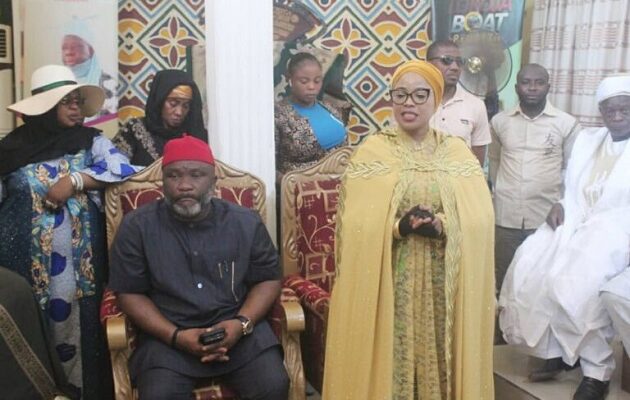 The FCT Minister of State, Dr. Ramatu Tijjani Aliyu, on Sunday, joined hundreds of sympathisers to offer special prayers for the repose of the soul of the late Maigari of Lokoja, Dr. Mohammodu Kabir Maikarfi 111.

The 40-Day prayer session, which was led by the Chief Imam of Lokoja, Sheikh Muhammed Aminu Shaban, was attended by the Ohimegye-Igu of Koton-Karfe Kingdom, HRM Alhaji Abdulrazak Gambo Sani Isah-Koto, the Sardauna of Kakanda, Alhaji Tijjani Ahmad Aliyu and all the Hakimis.

Others at the event included top politicians, federal and state government functionaries as well as friends and relatives of the late Maigari, who died at the age of 81 years.

The Minister, who condoled the family of the deceased, later signed the condolence register.

“He (deceased) had lived a life of service and offered counsel and fatherly guidance for the peace, unity, growth and development of the state in particular and Nigeria in general  during the thirty years of his reign as Maigari of Lokoja,’’ Dr. Aliyu wrote in the register.

Dr. Aliyu had earlier described the late Maigari as “a great patriot and unifier who ruled the people of Lokoja Emirate for many years with commendable wisdom, benevolence and an uncommon dedication to duty.’’

She commiserated with the government and people of Kogi State on the death of their illustrious traditional ruler.

She said that the late Muhammodu Kabir Maikarfi 111 would long be remembered and honoured for his notable contributions to the development of his community, state and country.

“The late monarch was a father with whom I shared the vision of a peaceful, politically stable, united, progressive and prosperous Nigeria to which every citizen will be proud to belong.’’

The Minister said that she would forever treasure the memories of the late Maigari as a great patriot, indefatigable unifier and bridge-builder.

“Maigari did his utmost best as a  traditional ruler to strengthen the bonds that bind Nigerians together in the interest of national peace, harmony and progress,’’ she said.

The Minister prayed that Almighty Allah would receive Mohammodu Kabir Maikarfi’s soul and grant his people a worthy successor who would build on the laudable legacies of his life of service to the community and country.