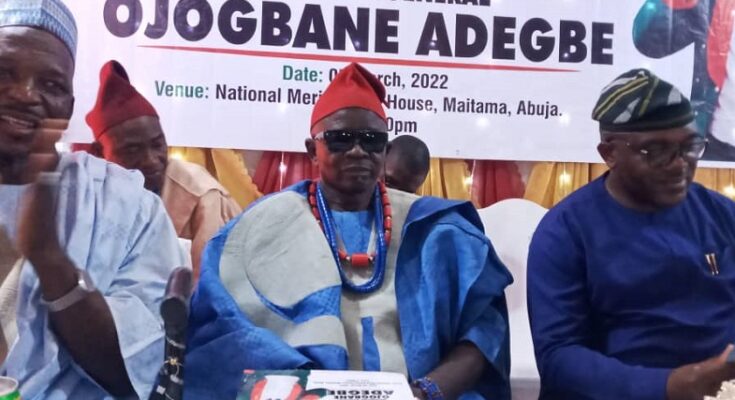 The management of the Emodu Development Association led by Mr Paul Ikwoche has celebrated the promotion of Ojogbane Adegbe to the rank of a Brigadier General in the Nigerian Army.

They described him as a kind hearted man that gives back to his community.

Mr Paul made this revelation in Abuja on Saturday during a reception held in honor of Brigadier General Ojogbane Adegbe which was witnessed by mammoth crowd.

Mr Paul also noted that the promotion of Ojogbane to the rank of a Brigadier General does not only make sense to the immediate family of Ojogbane but to Nigerians as a whole and Emodu Chiefdom in particular.

“He has contributed immensely to the missionary work in the village lifting many people from poverty and providing jobs for unemployed youths  in his land”
He further prayed that God in his infinity mercy will continue to sustain Brigadier General Ojogbane In all his doings.
Also speaking, the royal father of the day, chief Micheal Wada Idoko prayed for the Brigadier General and the entire people Emodu chiefdom to grow in grace and honor in order to develop Nigeria and Emodu Land.

In a goodwill message, the President of Emodu Community Secondary School Ofabo Old Students Association (ECSSOOSA) Mr Friday Alfa expressed his gratinggude to Brigadier General Ojogbane for always giving attention to the development of Emodu Community Secondsry School Ofabo.
Alfa further felicitated with all members of Emodu chiefdom/Adegbe’s family on behalf of ECSSOOSA for the glorious advancement of the Brigadier General.In the same vein, the Chairman EDA Board of Trustees Alhaji Abubakar Abdulahi Dangara appreciated God Almighty for giving is a son like Brigadier General Ojogbane.
Responding to the gesture, Brigadier General Ojogbane Adegbe expressed deep gratitude on the honor bestowed on him by his own people. He maintained that this honor would spur him to serve the nation in a great capacity.
Ojogbane also observed a one minute silence in honor of late Mrs Christiana  Eyene Okeme Iye Ofabo , the wife of Chief Moses Okeme.
He further revealed that he would continue to do good for his people as God continues to grant him the grace and the strength as such is the only way lives could be impacted.He encouraged all his well-wishers to be committed to loving one another saying “There is never a time when you have your neighbour’s problem  becomes yours that yours will not become God’sHe finally prayed for journey mercies for all his well-wishers