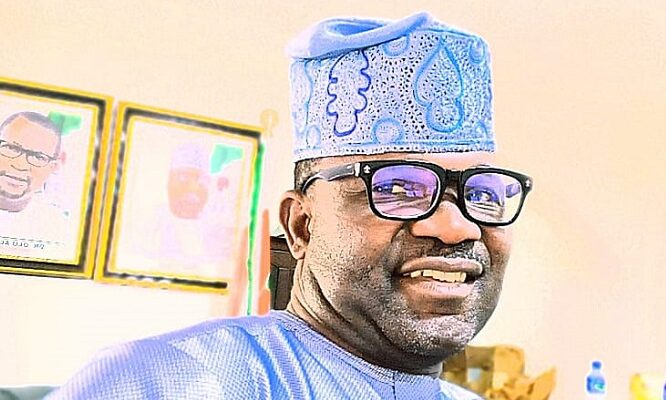 The National Publicity Secretary of Social Democratic Party (SDP), Ambassador Rufus Aiyenigba, will on June 24, be honoured with a ‘Distinguished Community Service’ award from his native community, Ekinrin Adde in Ijumu LGA of Kogi state.

According to Komolafe, the EACDA award is in recognition of SDP spokesman’s meritorious service to Ekinrin Adde community over the years.

“His footprints in the community, even at a very young age, cannot but be a motivation to the upcoming generations,” the statement said.

He has attended several conferences, seminars and workshops in social development, democracy and rights monitoring, education and rural development under the auspices of UNDP, ICPC, EFCC, EU, INEC, among others.

Conferred with the Ambassador for Peace Award in 2006 on International Peace Day by Universal Peace Federation – an International NGO with Observer Status with the United Nations (UN).

He is a social entrepreneur, political communication consultant, writer, author and biographer, public affairs commentator who has been published severally in Nigerian major newspapers.

An events director and master of ceremonies (MC), Ambassador Aiyenigba has anchored first-rate corporate and social events such as book launch, and fundraisers.

His Work Experience Include:

He Has Held Social & Political Leadership Positions As:

Special Assistant to the Chairman, ToungoLGA, Adamawa State & the pioneer President of Association of Local Governments of Nigeria (ALGON) (1999-2002).

Secretary, Civil Society Coalition for Good Governance (CISCGO). The NGO Network actively partnered with INEC in the conduct of the 2007 general elections.

Between February 2018 to no, he has served his political party, the Social Democratic Party, SDP as:

Secretary, Congress Committees to Osun and aGombe States, and was the Chairman, Primary Electoral Panel to Delta State to nominate Candidates of the party for the 2019 General Election.

Chief of Staff to the National Chairman and National Press Secretary.

Currently, he is serving as:

He is the Convener& Chairman, Conference of Spokespersons of Political Parties in Nigeria (CSPPaN).

In September 2021, he was appointed as the Deputy Country Director, Democracy for Africa Project (DfAP), a Social Development Agency of the African Union (AU). The organization has its Headquarters in Kigali, Rwanda.

Convener & Director-General, Pro-Nigeria Group (P-NG), 2016 till date. On December 16, 2017, its NWC passed a resolution in Abuja that the group should to evolve to a 0citizens’ socialist political party and to register it with INEC as Pro- Nigeria Democrats (PND).

BoT Member & Secretary, Friends of Olu Adde, a social Think-Tank & Solidarity Team for the (2016 till date).

In 2018, he wasunanimously appointed by the leaders and stakeholders of Ekinrin-Adde, his community, to serve as Secretary, Ekinrin-Adde Political Stakeholders’ Forum (EAPSF) under the Chairmanship of Asiwaju (Gen.) J.O.S. Oshanupin (Rtd), former General Officer Commanding, (GOC), 3rd Armoured Division, Jos.

He Has Been an Active Political Player in the last Twenty (20) Years As:

Ambassador Rufus BamigbaiyeAiyenigbaAFPjoined the Redeemed Christian Church of God (RCCG) in 1996 in Kaduna at a Model Parish.

He is married to his ebony jewel, Deaconess Esther Olabisi and the marriage is blessed with Children.