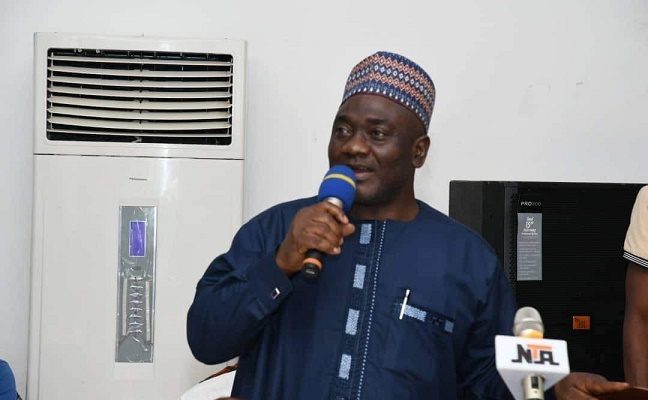 Echocho: Kaleidoscope of a Progressive Legislative Agenda in Kogi East

As the sun sets for the first tenure of the Senator representing Kogi-east, Dr. Jibrin Isah Echocho, one thing the supporters and opponents of the federal lawmaker would find common ground, beyond the gulf of divergent rhetoric and strong views vigorously held on the quality and quantum of his achievements in the last three and a half years, is the fact that he was never a benchwarmer in the Red Chamber.

In style and substance, in the high drama of legislative business in the National Assembly and constituency projects at the grassroots, Echocho has made it clear to all that an effective legislator can fashion out a comprehensive, people-oriented developmental agenda for his constituency aside the lawmaking business.

Echocho is a household name in Igala Kingdom and the entire Kogi state, reasons for such notoriety is not farfetched from his renowned performance in the financial sector, as an astute bank administrator, a true lover of his people as his testimonials of lifting numerous other indigenes and extension of good gestures to the old, young, privileged and less privileged, abound on the lips of many. Echocho’s name in itself has opened doors for many!

Born on February 28, 1960, Isah Jibrin, rose through the ranks as a banker to the peak of his career. In 1988, he joined Chase Merchant Bank Plc as an analyst. He moved to Afribank International Limited (Merchant Bankers) in 1991 as the Pioneer Head of Project Finance/Leasing Department. He was made the Pioneer Head of Capital Market group in 1993. In 1998, he was the pioneer Managing Director/Chief Executive of AIL Securities Limited.

Sooner as anticipated the name “Echocho” was synonymous to several good things in Kogi state. To the young ones, an inspiration to emulate a success story of a rise from grass to grace, many others were stunned at how a man would have such a large heart to tirelessly do good and as at that time Echocho stood out as one befitting of occupying a vintage political position of service to be better placed to continue his trajectory.

However, despite his bitter experience during his first outing as a politician,  Echocho’s passion to serve his people prevailed over any past hurt and grievances. When he realised that Governor Bello’s kind of politics was laid on values of sincerity, trust and fairness he yielded to the calls of several sons and daughters of Igala extraction who had continued to clamour for a befitting representation at the red chambers without any ray of hope.  The jubilation which erupted after his answer to the call of his people could not be totally explained in words.

His emergence as the Senator representing the good people of Kogi East came at the 2019 general polls in a keenly contested election with close rival after a supplementary election, where he polled 134,189 votes and Ali Atai Aidoko, the candidate of the PDP polled 74,201 votes.

In three years of his stewardship, he has erased the age-long memories of bad representation and is setting a remarkable template of progressive legislative governance.

As part of the report of his stewardship, Senator Echocho was recently accompanied by the state deputy governor, Chief Edward David Onoja, and other top government functionaries to some landmark constituency projects. Notable amongst several is the Ajagumu-Odu road, Ibaji Rice Mill factory, Skills Acquisition Centre in Anyigba, Acharu Oil Palm Mill industry, Okete General Hospital, the on-going Imane General Hospital and a host of other projects across Kogi East which are a perfect testament of effective representation.

Echocho, who broke down in tears during the inauguration ceremony recalled how he bounced back to relevance, reckoning when God sent his servant, Governor Yahaya Adoza Bello, to make possible what men said was impossible. He stands among men to give more to his people and his tears should remind many that the downfall of a man is never a nail to his coffin. Echocho lives again and again in impact.

Senator Echocho, as a lawmaker, has also championed life-saving bills such as the bills for the establishment of orthopedic hospital in Dekina, upgrade of Kogi State College of Education Ankpa to a degree-awarding institution and his other contributions through motions on National issues are landmark legislative accomplishments. In fact, Senator Echocho has shown his caliber at the Red Chamber, most pertinently on issues of the economy, finance and other corresponding areas.

The former bank executive has differentiated himself as a noiseless achiever and a true servant of his people who, right from his first shot at politics, meant well. The currently agreed assertion is that since the birth of democracy in Nigeria and the creation of Kogi State, senators have represented Kogi East in the past but left tales of bad representations behind. It was boldly affirmed that Echocho has fulfilled what past senators of the region promised the people but never did any of them.

While seeking a return to the Red Chamber to continue his good works, the Kogi- east senator has insisted on giving good dividends to the people he represents up until the expiration of the four year mandate he was elected to serve. In recent times Senator Echocho has embarked on the establishment of yet another rice milling factory in Abejukolo, Omala Local government area adding to the already functional Rice milling factory in Ibaji LGA. The impact of this factory would not only ensure a boost in the agricultural and socio economic indices of the region, but a great relief to rice farmers in the area.

The Onu of Ogobida (Ayidu of Aloji) and the entire Gago of Aloji could not hide their excitement and appreciation over yet another iconic proposed establishment of a Cashew Processing plant within their locality in Ofu Local Government Area. Ofu local government area of Kogi state is one of the leading Cashew productions in Nigeria, but due to the lack of processing facility, the people barely make profit from plantation in the area. Today, Senator Isah Echocho is ambitiously embarking on the construction of Cashew Processing Plant in the area. This will also enhance agriculture, socio-economic activities of the people as well as job creation.

In addressing the issues of unemployment and youth restfulness, Echocho has successfully constructed and equipped a skill Acquisition Centre in Anyigba where basic skills such as carpentry, fashion and design, shoemaking, and so on are currently taught. This skills acquisition is equipped with state of the art tools for different purposes.

Many sons and daughters of Kogi-east have argued that Echocho’s bid for a second term at the Red Chamber was not only deserving but required for him to continue his industrialisation master plan for Kogi-east senatorial district; after all, who wants good things to end?

– Ben Atabo wrote from the University of Jos, Plateau state