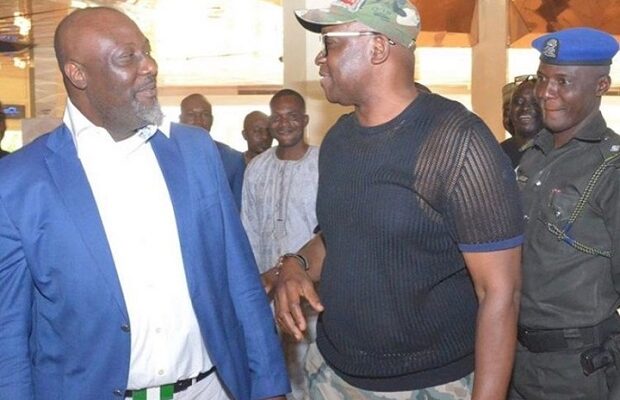 Former Governor of Ekiti state, Ayodele Fayose, has has described Dino Melaye as a jester in the palace of politics.

Reacting to Dino’s sarcastic comment following Fayose’s take on the two leading presidential candidates of the Peoples Democratic Party (PDP) Atiku Abubakar and Bukola Saraki, the former Governor described the former lawmaker as a “political Hushpuppi who is capable of sleeping on three different political beds in one night”.

The former Governor’s spokesperson, Lere Olayinka, as quoted by Vanguard, said: “If the man he is deceiving with his fake support speaks, we will respond accordingly.

“As for Fayose, Nigeria and its people must be rescued from this APC calamity that political jester of Kogi teamed up with others to enthrone.

“That is a project to which he (Fayose) is totally committed, not rantings of a jester in the palace of politics.”

He, however, vowed to restrain himself pending when those he said Melaye was representing would enter the fray.

Recall Fayose had in an interview on Channels Television programme, Politics Today, flayed the duo of Atiku Abubakar and Bukola Saraki for leaving the PDP before the 2015 election.

In an unsolicited reaction to Fayose’s interview, Dino Melaye said “It is amazing that Fayose who could not manage and retain a PDP state now aspires to lead a behemoth structure like Nigeria. He left Ekiti State worse than he met it. How could he fail in the state and expect promotion to the national?”