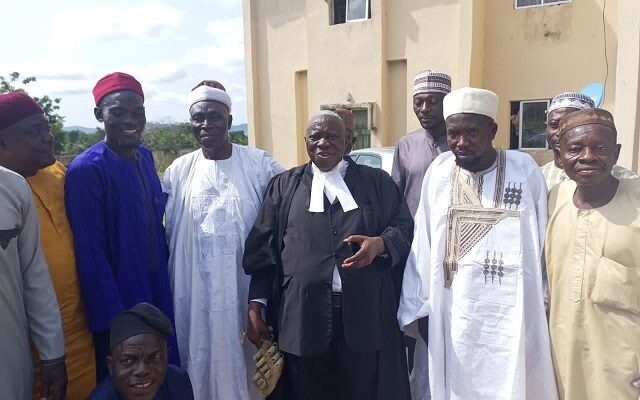 Court Rules on Ownership of Mawoji Land in Felele

A Kogi State High Court sitting in Lokoja has declared as null and void the purported ownership of “Mawoji farmland” situated at Felele Area in Oworo District of Lokoja LGA by Mallam Shuaibu Isah.

Presiding Judge, Justice Nicodemus Awulu, in his ruling said the Claimant, Alhaji Shuaibu Isah has failed to provide sufficient evidence that the land spanning Shagari bridge, Crusher, Felele, Mawoji to Ahuete to Okumi valley to Kporaka bridge belongs to his forefather, Adoga Maiyaki and not to Alhaji Mahmud Abdulkadir and two others.

In his defense, Counsel to the Claimant, Divine Anjelozie, on the 3rd of November, 2015 sought the order of the Court in a writ of summons against the defendants to among other things declare that the parcel of farmland known as Mawoji farmland by Customary Right of Occupancy Number 041/2010 is lawfully and rightfully his.

According to the Counsel, the claimant also sought a declaration that the purported sale of a portion of the said Mawoji farmland by the Ist and 2nd defendants and thier agents without the consent of Maiyaki’s family is illegal, null and void.

It also seek order of perpetual injunction restraining the defendants or their agents from further trespass as well as One hundred thousand naira as damages suffered by him.

Lead Counsel to the 1st and 2nd Defendant, Alfred Shehu Akpala in his submission sought that the Court should declare that the Isegba Obah Community is the Customary owner of the said land.

Akpala also prayed for an order of perpetual injunction restraining the Claimant or anybody from interfering on any part of the land as well as the awarding of Five hundred thousand naira against the Claimant.

Justice Awulu who declared that the Claimant’s account of devolution of the land to him is “wobby and unsatisfactory”.

Justice Awulu ruled and declared that the Isegba Obah Community being 1st and 2nd defendants/counter claimants is the Customary owner of the land lying from Shagari bridge, Crusher, Felele, Mawoji to Ahuete and Ahubena to Okumi valley down to Kporaka bridge and land respectively.

Speaking after the judgement, lead Counsel to the 1st and 2nd defendant, Alfred Shehu Akpala described it as a landmark judgement spanning eight years of litigation while Cousel to the Claimant Divine Anjelozie declined comment on the judgement.

In their separate reactions, one of the defendant and Chief Imam of Felele Community, Alhaji Mohammed Kabir Abdulkadir and the Elleson of Felele, Alhaji…………… described the judiciary as the last hope of Nigerians in view of the fact that the land case of over ten hectares has been on for eight years but that they got victory at last.

They expressed their readiness to accommodate the claimant in the case in the spirit of forgiveness and oneness towards the development of the area.