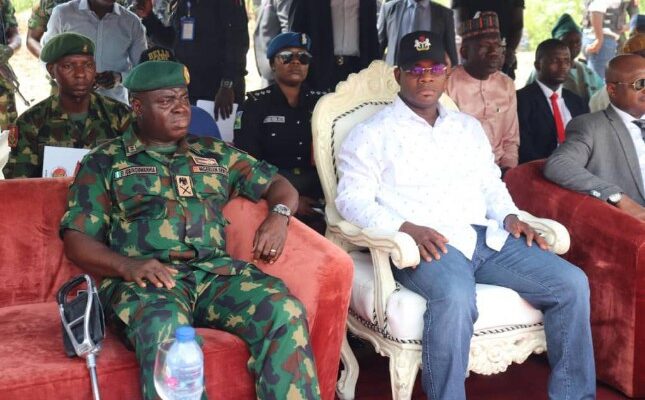 In his welcome address at the official flag-off ceremony in Okene, the Chief of Army Staff (COAS), Lt. Gen. Farouk Yahaya, said the exercise was designed to be conducted in the last quarter of the year to checkmate all forms of criminality as the yuletide season approaches.

He added that the exercise was as a result of the prevailing security challenges across the country, saying, ”similar exercises are also ongoing in other parts of the country under different names depending on the peculiarity of each region”.

He explained that the exercise would involve stages of operational activities including patrols, ambushes and raids of criminal hideouts.

He added that it would involved some non kinetic activities in form of Civil Military Cooperation programme, such as free medical outreaches in some selected communities among others.

”Our choice of medical outreach in support of the exercise is deeply rooted in our belief that the support of the host communities is key to the success of the entire operations,”

He stressed that the medical outreaches would ameliorate the existing health challenges within the targeted communities, and foster existing cordial relationship between CAR and host communities.

The COAS further disclosed that the exercise was a joint exercise involving all security agencies in Kogi as well as Vigilante Group to ensure peace across the state.

Yahaya emphasised that the decision to make it a joint exercise was in line with his vision to have ”a professional Nigerian Army, ready to accomplish assigned missions within a joint environment in defence of Nigeria.

”Therefore, we must work together to achieve the common goals of safeguarding the lives and properties of Nigerians everywhere,” he said.

The COAS  further commended the Kogi State Government under the leadership of Governor Yahaya Bello for providing the enabling environment for them to operate in the state.

He appreciated the heads of security agencies for their continuous support and collaborations in tackling various security challenges, as well as the traditional rulers and host communities across the state for making the program a success.

In his own capacity, Maj Gen. IS Igbinomwanhia,appreciated the COAS for providing the resources for the free medical outreaches and the entire exercise.

”Kogi is a peaceful place and very strategic and important to our nation. We must keep Kogi very safe and habitable for residents and passersby.

”We are not against the people, but against the criminal elements who do not want our people to live in peace.

”We promise that wherever they are, we will make Kogi unconformable for the criminals in whatsoever ever names they called themselves’,, he said.

In his remarks, Kogi State Governor, Alhaji Yahaya Bello, who flagged off the exercise, thanked the COAS for organising the wonderful exercise to keep the criminals out of the state and Nigeria at large.

The governor assured the COAS of the full support of the State Government, saying the exercise was timely especially towards the 2023 general elections.

He urged all the Local Government Chairmen and the traditional rulers and the entire people of the state to continue to cooperate with the State Government as well as the security agencies.

The governor assured that Kogi would remain a peaceful and secure state as far as Nigeria was concerned, stressing that if Kogi was in turmoil the nation would be in turmoil being bordered by nine States including FCT.

Bello, therefore warned that anyone no matter how highly placed in the society who got himself or herself involved in any criminal activity would face the wrath of the law.

”I will continue to lead this exercise from the front to ensure enduring peace for the people of Kogi State. We cone in peace and we mean business,” Bello said.

The Attah Igala, HRM Mathew Opaluwa Oguche, and other royal fathers were present at the occasion

The Attah Igala who is the President of Kogi State Traditional Councils, commended the COAS for the exercise, assuring the continuous support of the traditional institution for the security agencies and the state government.

The royal father stressed that the safety of lives and property had been part of their core responsibility as traditional rulers in their respective domains.