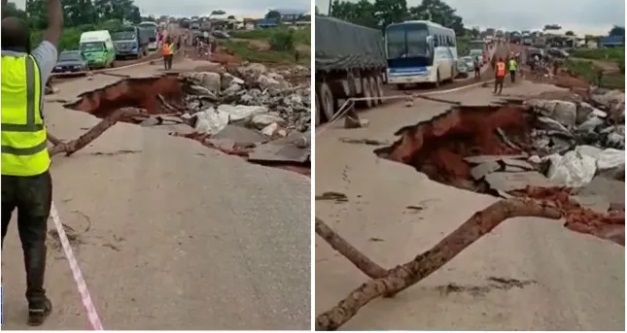 The agency in a statement released in Tuesday advised motorists from or to southwest via Lokoja-Kabba federal highway to take alternative routes.

Revealing the reason for the warning, Bisi Kazeem, the Agency’s spokesperson said there is a gully in the section of the highway between Zariagi and Obajana cement factory.

Kazeem noted the caving has led to an obstruction of free flow of traffic and that concerned authorities are making efforts to repair it.

Commuters were asked to use Lokoja-Okene-Kabba, or Lokoja-Okene-Ogorimangogo roads as alternative routes to or fro south-west.

“This development has led to an obstruction of free flow of traffic . As all the concerned authorities are making frantic efforts to carry out emergency repairs to restore normal flow of traffic, the emergency work may take some hours to complete,” the statement reads.

“In view of the foregoing, motorists, travelers, and the general public are hereby advised to use Lokoja-Okene-Kabba, or Lokoja-Okene-Ogorimangogo as alternative routes to or fro Southwest.

“The Federal Road Safety Corps solicits maximum cooperation of the motoring public on this development. The Corps will also continue to update the public periodically on further developments on the ameliorative work going on at the failed portion of the road.”