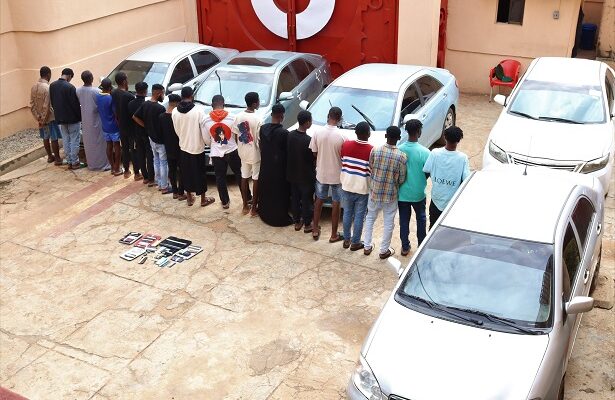 As part of efforts by the Economic and Financial Crimes Commission (EFCC) to curb the rising wave of internet related fraud otherwise known as ‘Yahoo-Yahoo’, the Ilorin Zonal Command of the Commission have again extended its dragnet to Kogi State leading to the arrest of 18 suspected ‘Yahoo-Yahoo Boys’ in Lokoja, the state capital.

This is the second such operation in the State within the last two months.

Operatives of the Ilorin Zonal Command of the EFCC, had in June 2022 arrested 19 suspected fraudsters at different locations in Lokoja.

According to a statement by the Media Unit of the Command, the latest arrest, which was made on Wednesday, August 3, 2022 followed actionable intelligence received by the Commission.

Preliminary investigations have shown that the suspects operate as a syndicate to scam unsuspecting victims.

The suspected ‘Yahoo-Yahoo Boys’, had incriminating items in their possession including five different brands of exotic cars, phones and laptops. They have volunteered statements to the Commission and will be charged to court upon the conclusion of the ongoing investigations.

Spread the love
Tweet
Previous PostNDLEA Seizes 456.8kg Illicit Drugs in Kogi Next PostYagba East Has All It Takes to be Leading LGA in Kogi - Odofin