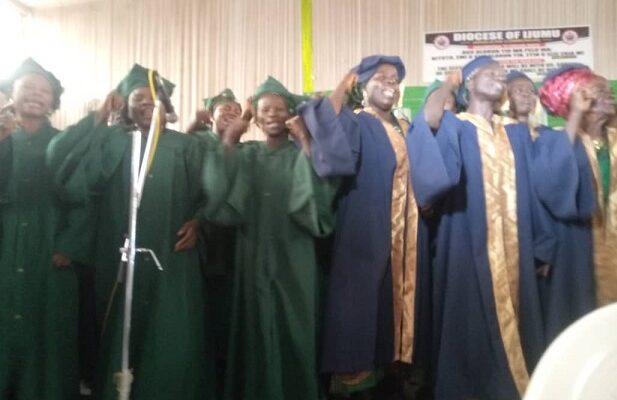 Founders of the NGO, Mr. Percy Irefin and Mrs. Janet Irefin, made this known during the graduation ceremony of the foundation’s literacy programme in Aiyetoro Gbede, Ijumu local government area of Kogi state at the weekend.

The Irefins, in their address, congratulated the resilient adult graduands and also expressed their joy in making the foundation a reality.

They announced that the next phase of assignment is youth empowerment programmes aimed at creating higher qualities of life for the underprivileged youth.

“We want to train and empower 50 youths in all towns and villages in Gbede Land. Our goal is the empowerment of these youth to help them become self-reliant as they create their own jobs. We also want to assist 20 widows start a trade or improve on an existing ones, thereby creating an avenue for them to sustain themselves and their families.

“We truly believe that the intervention of Chief David Ojo Irefin Hope Foundation in the aforementioned will curb unemployment, poverty, and social vices.”

One of the coordinators of the programme, Chief Samson Arowosafe, congratulated the graduands on their successful graduation, urging them to use the knowledge gathered to better their lives and be responsible in the society.

According to him, the NGO was established to sustain the legacies of Late Chief David Ojo Irefin, who was passionate about education for all. He restated the commitment of the organization in ensuring that adults get access to quality basic education that will make them contribute meaningfully to the progress of the society.

Another coordinator of the programme, Chief Peters Alabi in his address, noted as a matter of emphasis that the sponsor and the promoter of Chief David Ojo Irefin Hope Foundation, Mr. Percy Irefin has single handedly provided writing notebooks and textbooks and all other materials free of charge for all the adults learners and the coaching classes.

“He has also honored God by generously making food items and cash available to the adults during festivals, even to outsiders as well and has consistently paid all the teachers their monthly stipend as at when due since the programme was launched over two years ago. May the Almighty God continue to bless and protect him and his family.

A community leader in Ayetoro Gbede, Hon. Dayo Akanmode commended the Founders of the Foundation, Mr. Percy Irefin and his wife Mrs. Janet Irefin for their vision of creating an enabling atmosphere for the older generation to be literate.

Hon. Akanmode noted that with the knowledge acquired, the graduands would be able to key into the current digital world and contribute to national development.

Some family members of the Founder, Pastor Samuel Irefin and Mr. Paul Irefin said with the successes recorded, their late Patriarch of Irefin dynasty has been immortalized in the minds of the people.

The NGO was established in honour of Late patriarch of Irefin dynasty, Chief David Ojo Irefin, an educationist per excellence to promote teaching and learning among school dropouts as well as those that without academic background to be able to read the Bible and also understand basics English.