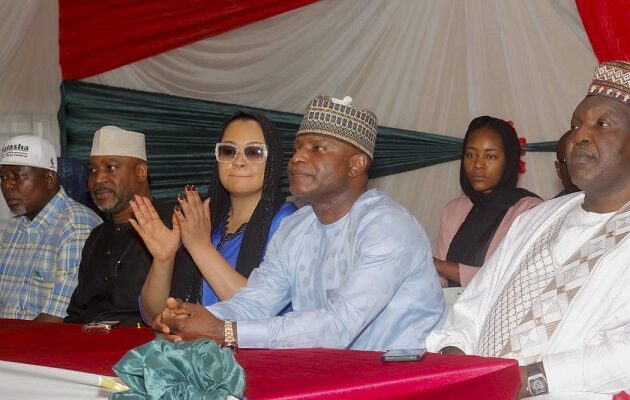 Senator Ahmed Ogembe has promised to join hands with other leaders to ensure all candidates of the Peoples Democratic Party (PDP) win in Okene LGA in the forthcoming elections.

Ogembe made the promise during a meeting with PDP stakeholders from Okene local government area on Wednesday.

Senator Ogembe told the stakeholders that “I can assure you, we will do everything we can in Okene LGA to ensure PDP wins in the next election.

“I have only one interest and that is for all PDP candidates to win the forthcoming election. Whatever it takes, all of us must come down to ensure the victory of all the party’s candidates.

“I am throwing all my weight behind you, we will vote them out, by the time we finish voting them out, they will be dead politically.

“I am here appealing that as we progress with our campaign and leading into the election, I hope we will all work earnestly and honestly together for the success of our party.

“Let’s not cheat ourselves out of this chance, all our candidates matters, kindly vote for us, don’t sell your votes.”

Speaking further, Barr. Natasha stressed the importance of her independent candidacy fueled only by the yearnings of the masses and not that borne out of any godfather.

“I don’t have a godfather, my voice belongs to the people, and no one will dictate my actions, we are here for you, to serve you honestly and transparently.

“We understand the threat but let the desire you have to succeed be greater than the fear and the threat,” she said.

He noted that the rousing welcome given to Barr. Natasha during the homecoming is a testament of the acceptance of the people of Ebiraland.

He advised the party stakeholders to shun every sentiment to work vigorously for the success of the party.

The former Speaker, Hon. Momohjimoh Lawal also restated his readiness to work for the success of the PDP senatorial candidate and other candidates of the party.

He charged the party faithfuls to remain united and drop every differences to ensure the success of the party in the next election.

Natasha also met with the party caucus and traditional rulers in Ogori-Magongo local government area to seek for their support.

Spread the love
Tweet
Previous PostOpinion: Now That We Have Halims: Tell One to Tell Ten Next Post2023: Shade Da Viva Assures Gov. Yahaya Bello of Total Support for Tinubu-Shettima