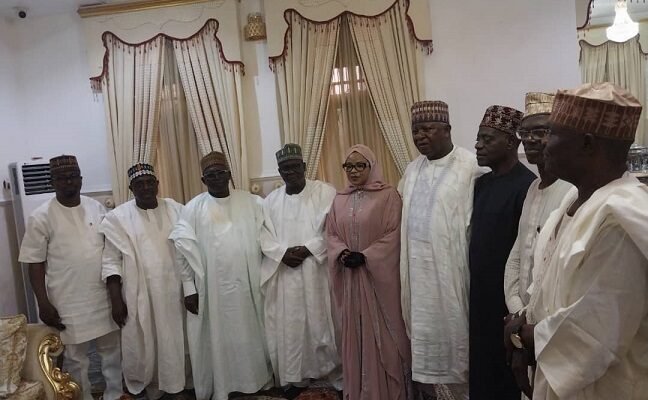 Minister of State for Federal Capital Territory, Dr. Ramatu Tijjani Aliyu, has commended the efforts of the leadership of Asiwaju Ahmed Bola-Shettima (AABOS) presidential support group for their commitments to the ruling All Progressives Congress (APC) and the presidential bid of Senator Bola Ahmed Tinubu.

Aliyu gave the commendation on Friday while receiving in audience, the Director General of AABOS, Alhaji Abdulsalam Iyaji, a retired Assistant Inspector-General of Police, who led other members of the National Executive Council of the group on a condolence visit to her Abuja residence over the demise of her mother.

She described the visit as a huge show of love, adding that an individual can only understand the nature of the people around him based on the measure of care he gains from them during his moments of adversity. She appreciated the group for identifying with her in her moment of grief.

“I appreciate you for identifying with me and my family over the death of our mother. You can only know the people around you by the way they care for you in such a period as this. You are my family, from Kogi state even though AABOS currently operates in 15 states as you indicated. I am happy that you are here and thank you for the prayers for our late mother.”

While commending AABOS leadership for their genuine efforts towards the electoral victory of the APC’s presidential candidate, Senator Bola Ahmed Tinubu and his running mate, Senator Kashim Shettima, the Honourable Minister said more hands were still needed to join what she called “Tinubu Victory Wagon”.

Speaking on behalf of AABOS, the Director General, Alhaji Abdulsalam Iyaji who first led prayers for the repose of the soul of the Minister’s late mother, said the motive of their visit was to commiserate with Dr. Aliyu and her family over the death of her beloved mother and to also intimate her of the activities of AABOS.

“We are grateful to you, Honorable Minister, for granting us audience. The purpose of our visit is to commiserate with you over the death of your mother. It is our prayers that the Almighty Allah grant her Aljanat Firdaus.

“The Honourable Minister, we are Asiwaju Ahmed Bola-Shettima (AABOS) presidential Support Group. We have our headquarters in Abuja here and branches in 15 states and in those states, through networking arrangements, we are able to cover the local government areas. We have Large followers and we are committed to the task of ensuring victory for our candidates, Asiwaju Bola Ahmed and Senator Kashim Shettima,” he said.

Spread the love
Tweet
Previous PostIgala Vanguard Allege 'Ebiranization' of Tinubu/Shettima Campaign Council in Kogi Next PostFlooding: 'We Have a Serious and Humanitarian Tragedy on Our Hands' - Kogi Governor