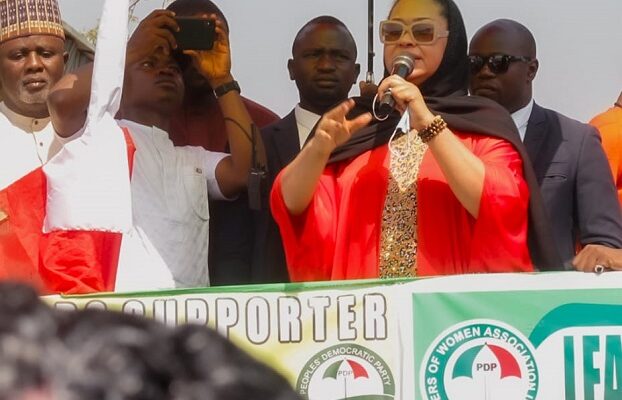 The Kogi Central Peoples Democratic Party (PDP) and Natasha Akpoti-Uduaghan Campaign Organization (NAUCO) has described the ruling All Progressive Congress (APC) in Kogi State as “a dirt-filled sinking ship that can not stand the test of time”.

In a statement signed by the Head of Media, David Itopa, the campaign council also described the APC as a failed party whose sane members are leaving in droves to the formidable and repositioned PDP as a result of the caliber and credibility of its candidates across boards, especially with the emergence of Atiku Abubakar as presidential candidate and Barr. Natasha Akpoti-Uduaghan as Kogi central senatorial candidate.

The PDP campaign council boasted that it will empty the APC and strip it naked for the restoration of the masses who have been in various excruciating pains as they try to survive each day, having been failed by the APC government.

“It is important to note that having failed in all facet of governance, including all their campaign promises, the APC is now a shadow of itself and only purveying lies and falsehood to preserve what is left of its shattered self.

“It is now obvious that the emergence of Barr. Natasha as the candidate of the PDP in Kogi Central district has sent shockwaves down the spines of the failed APC.

“The credibility and pedigree of Barr. Natasha is never in doubt and we are determined to rescue our people from the destructive chokehold of the APC,” the statement read.

NAUCO advised the ruling party to develop a shock-absorber as their defeat at the polls to Natasha Akpoti-Uduaghan will come like the terrific thud of a thunderstorm.

The statement laughed off claims by APC campaign council that a former Deputy Governor, Simon Achuba, former Okene LG Chairman, Yahaya Karaku and a host of others who recently defected to PDP are “expired politicians”.

“For the records, the massive defection of leaders of the APC to the PDP, across the three senatorial districts of Kogi State, especially Kogi central, is a testament to the failures of the APC.

“Of course, APC, as usual, can continue in its manifest lies and propaganda like they have always done to hoodwink the people, but one thing is clear, the electorate, like a transparent bag, has seen through the many lies and deceit of the APC and are determined to end their disastrous reign of impunity, ineptitude, cluelessness, kleptocracy and violence through the ballot.”