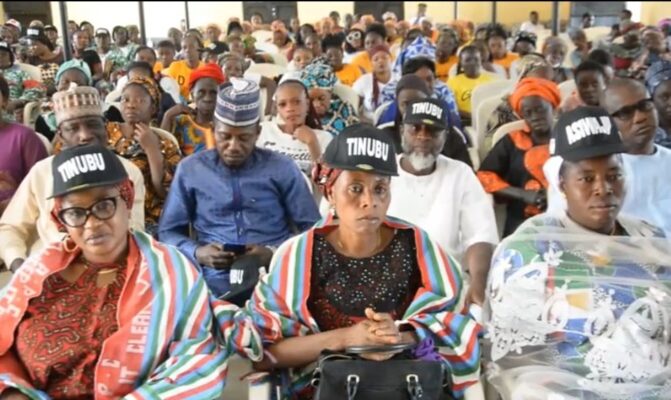 The North Central Group for Asiwaju Tinubu has appealed to women in the zone to vote for the presidential candidate of the All Progressives Congress (APC) in the 2023 polls for a better Nigeria.

Leader of the group, Hon. Abimbola Adedoyin-Okpere made the call at Iyara, Ijumu local government of Kogi state during a grassroot engagement of women groups and market women.

She pointed out that Asiwaju Tinubu is the right candidate to be Nigeria’s next President.

“His antecedents are there for everybody to see. He has been working hard. Somebody that has built people, can build the nation,” she said.

Hon. Adedoyin Okpere stated that Asiwaju Tinubu is the only Nigerian politician that has built people and has the capacity to build the country.

The group leader added that the group has coordinators at the state levels in Kwara, Kogi, Benue, Plateau, Nasarawa, Niger and FCT, as well as respective local government areas.

She added that the coordinators have been working to sensitize people to vote Asiwaju Bola Ahmed Tinubu and his running mate, Senator Kashim Shetima.

The President of Kogi State Traders and Market Women Association, Aishat Isah, the State Coordinator of the group, Yemisi Balogun and former Commissioner for Women Affairs promised to mobilize Kogi women for the actualization of the aspiration of Asiwaju Tinubu.