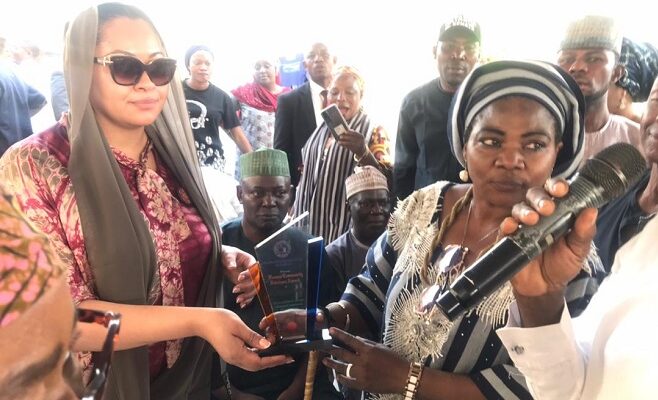 The Natasha Akpoti-Uduaghan Campaign Organization (NAUCO) has described the senatorial candidate of Peoples Democratic Party (PDP) for Kogi Central as one who has long carved a niche for herself as a different breed whose entire existence is anchored on capacity building, and to give back to the society through human and community development.

NAUCO made this known while reacting to the prestigious award bestowed on Barr. Natasha Akpoti-Uduaghan by FCT Ebira group for her commitment to human and community development.

The campaign organization noted that on different occasions, the good people of Kogi Central and other Nigerians who recognized the genuine efforts of Natasha Akpoti-Uduaghan towards capacity, community and nation-building, have honoured her with awards in a bid to show appreciation to her.

According to the campaign organization, “the award by FCT chapter of Ebira Political Forum in recognition of the efforts of Natasha Akpoti-Uduaghan for her human and community development service did not come as a surprise to everyone who has been following the activities of the Kogi Central PDP senatorial candidate.

“The award is indeed a testament of her selfless commitment towards capacity building.

“Akpoti is famous for her relentless efforts towards ensuring Ajaokuta moribund steel is not just working for the people of Kogi Central but for the benefit of Kogi State and all Nigerians, to lead the long dream of economic diversification and industrial revolution.

“Aside Natasha Akpoti’s campaign for the revival of Ajaokuta, she has been at the forefront of many life-changing and community intervention schemes across Ebiraland to ameliorate the suffering of her people who went through excruciating pain to earn a decent living.

“As a private citizen, Akpoti has constructed roads to end the plight of motorists on Obehira-Ibilo road which became a nightmare to commuters who ply the road on a daily basis.

“Natasha H Akpoti-Uduaghan is known for her scholarship programmes which are aimed at giving children education which earned her the title ‘the mother of 600’. Courtesy of the scholarship programme of Natasha Akpoti-Uduaghan; the orphans and children of the less-privileged who had lost hope of acquiring quality education were given hope to have education because she understands the significance of human and community development.”

The campaign organization noted that the list of her impact to her people and zeal to give back to the society is endless.